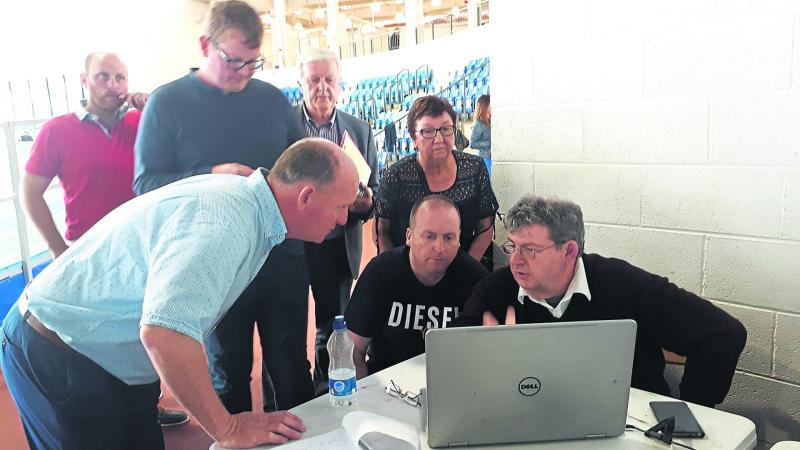 Crunching the numbers: Turlough McGovern (left) chats with Patrick Matthews (right) during the the tallying of votes in Athlone on Saturday

Longford was the slowest county in Ireland to start electing councillors last weekend due mainly to the fact that votes were initially sorted in Athlone before coming back to Edgeworthstown for counting.

Sorting didn't finish in Athlone until almost 6pm on Saturday evening and local election votes did not arrive back in Longford until nearly 9pm that night.

The decision to sort the votes in Athlone was highly criticised by local election candidates and count staff who spent an entire day waiting for boxes of votes that were supposed to arrive on Saturday afternoon.

“It was totally illogical,” Gerry Warnock told the Longford Leader.

“I think first and foremost what should’ve happened on polling day is there should’ve been two boxes - one for the local elections and the other for the European stuff and the referendum. It’s common sense in my view.

“All the ballot papers were colour-coded. It wouldn’t have been the most difficult thing in the world to implement at polling stations. Athlone is only down the road and if a stray one got in, it could easily be sorted out.”

Time, cost and the anxiety of election candidates were also hugely affected by the extensive delay, he added.

“I’d imagine myself that, even from a cost point of view, I think it would’ve saved thousands of euro of public money and it would’ve certainly sped up the count for both the staff that are here counting through the night, and for candidates also. It’s kind of prolonging the agony.

“I think next time, hopefully, a little bit more common sense will be applied. Peggy Nolan expressed her fury at the decision on Saturday night at approximately 9.40pm when a count still hadn't gotten underway, while other counties had one or two counts already completed.

And, she added, staff in Longford would have been more than capable of conducting the sorting and counting of votes themselves.

"To me, as a Longford person, it's a very bad reflection on my county and my town,” she said.

“We could have facilitated this entire count here in Longford and the hierarchy that decided differently should be hanging their heads in shame tonight.

"And that's not the council staff, because I know every single one of them personally and they're chomping at the bit to get this over and done and to do it in a professional and mannerly fashion and that's what they're trying to achieve.

“And they were hindered in their attempts, all by the hierarchy that decided that it had to be their way or no way."