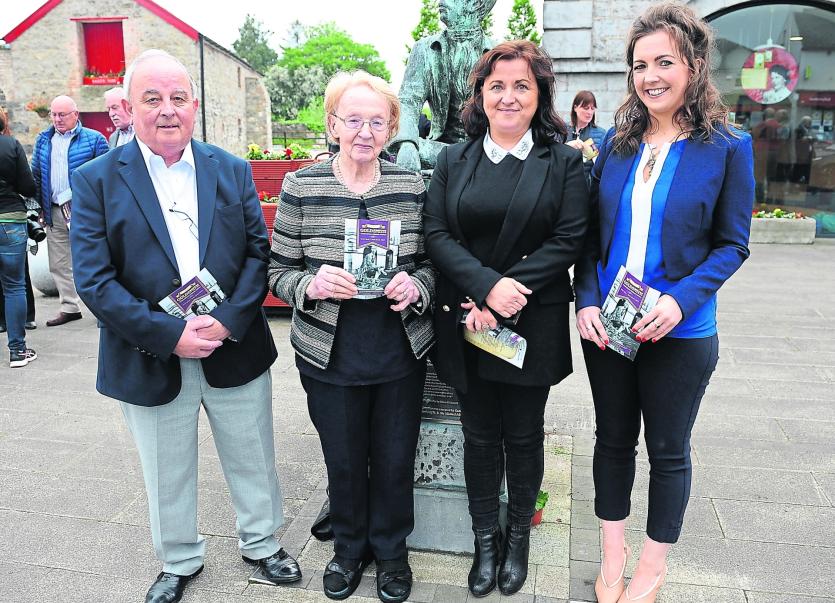 Willie Dowler, Betty McGoey, Anne Tully and Claire McCormack at the launch of the Goldsmith Literary Festival earlier this month. The festival kicks off this Friday evening

After 35 years of literary events in south Longford, the Goldsmith Literary Festival shows no sign of stopping any time soon.

With a programme that just gets bigger and better every year, more and more people are sitting up and taking notice of Ballymahon's literary history, with people from across the country and further afield ensuring they can come to the county for the annual festival.

This year's theme deals with journalism and, with fake news rife in the world of today, all events taking place this weekend will relate to a classic line from Oliver Goldsmith's She Stoops to Conquer: “Ask me no questionsa nd I'll tell you no fibs”.

There will be a wide range of events taking place this weekend that deal with the importance of supporting local journalism, getting your news from valuable local sources and, most importantly, the future of journalism in a world that is going more and more online by the day.

“The truth is that Goldsmith spent the vast majority of his working life as a hack writer - as a journalist. Actually, his first period of proper employment - his first real job, after abandoning pretensions of medicine and dabbling in teaching - was with a publisher called Ralph Griffiths,” said Arthur Conlon of the Goldsmith Literary Festival committee.

“He actually is better known as the publisher in 1750 of Memoirs of aWoman of Pleasure - possibly the first pornographic in the English language. It's better known to us as Fanny Hill.”

Thankfully, Mr Conlon added, Goldsmith's sensibilities were spared from all that.

“I'm not sure what he could have added, given his awkwardness with woman, but he was asked to write reviews for the periodical monthly review,” he said.

For all of Goldsmith's fame as a dramatist and a novelist, journalism was his bread and butter and, like many writers, he got paid by the word so he could keep food on the table.

“We hope this year to look at the world of journalism through his eyes and also the future of the profession,” said Mr Conlon.

Moving onto the theme for this year's festival, he explained that journalists have to ask awkward questions every day to go behind propaganda and try to disrupt the tightly-controlled flow of information from those who seek to cover up the truth.

“But how can an industry that faces such mounting change still fulfill its role as a watchdog of the state and a beacon for democracy? And I suppose that's the nub of what we're trying to get at this year.”

Millions are spent on promoting social media causes currently and Mr Conlon questioned this platform as a news source: is the current internet-reared generation losing the ability to judge and evaluate the different sources of news?

“Is a Facebook post the equivalent of a meticulously researched Prime Time Investigates? To some of our young people, maybe it is,” he continued.

“What does the media industry have to do now to adapt? Are we willing to pay for quality journalism? Or is it much easier for us just to Google and believe the first search result?

“If people are not being informed in a truthful manner, that effects democracy and our decision making across our society.”

This year's festival will question whether or not we have lost the ability to be critical.

“A tweet is easier than a long article. Look at Donald Trump trying to reduce some of the most complex issues known to man into 160 characters.

“What we believe is not in doubt is the essential role of journalists in firstly improving the depth, range and quality of the news we hear, and thus promoting better engagement and the integrity of the democratic process.”

The role of journalists is “absolutely essential” to modern society, he said, adding that he hopes this year's festival will get that point across over its three-day programme.

There will be a number of speakers on the topic over the three-day festival, starting on Friday, May 31, in the Rustic Inn, Abbeyshrule.

Willie Kealy, former deputy editor of the Sunday Independant will give a talk entitled The Decline of Print and the Future of Good Journalism, starting at 9pm.

On Saturday, there will be two press-related discussions: Press Freedom or a Free Press, with Cian McCormack, Professor Brian O'Neill and Press Ombudsman Peter Feeney, will be the first of the two, taking place in Ballymahon Community Library at 11am.

At 1pm in the same venue, Shannonside producer and journalist Denise Canavan will chair a discussion entitled The Digital Onslaught - What Future for Print Journalism.

There will be a wide range of other events taking place throughout the festival and in various venues, including music, readings and discussions.