Longford's Eugene McGee was a once in a lifetime character

Colmcille remembers: McGee was ‘straight-talking’ and ‘pulled no punches’ 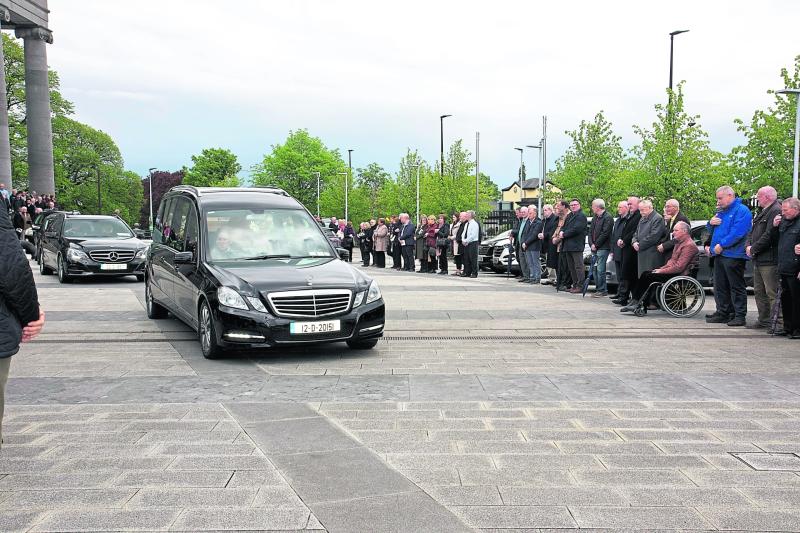 A guard of honour, including members of the Offaly 1982 All-Ireland winning team, outside St Mel's Cathedral PICTURE: MICHELLE GHEE

Eugene McGee was what you would call a once in a lifetime character.

A personality that transcended the codes of GAA and local as well as national media with consummate ease, here was a person who oozed class but who displayed equal levels of humility with it.

The sudden nature of the former All-Ireland winning manager's death just over a week ago brought with it plenty of famous faces to this part of the country and countless deserving tributes to boot.

Not that the man at the centre of it all would probably have been comfortable with such attention.

If the many testimonies from those of Eugene's journalistic and sporting peers not already told you as much, the remnants of last Wednesday's funeral mass certainly would have.

Fr Michael McGrath, in his opening address to mourners at a thronged St Mel's Cathedral spoke of how Eugene “was always rooted in his Longford place of birth” and had always abided by the mantra “to remain true to the local”.

No more evident was this than in his beloved Colmcille as locals turned out in large numbers to accompany arguably its most famous son on his final journey home.

Motivated no doubt by the fact the club's own grounds had been named after Eugene's own brother Fr Phil, vice chairperson Marie O' Reilly Keenan summed up the man in one sentence.

“I recall Eugene saying: 'All a club needs is a field, players, a ball, boots and everything else will fall into place,” she said.

A simple, yet suitably apt insight into the 77-year-old's unique ability to make even the most arduous of tasks appear facile.

Ms O' Reilly Keenan, who was speaking on behalf of club chairperson Ciarán Farley and its executive, relived memories of its famous 2008 championship winning campaign, an odyssey the former All-Ireland winning manager had a hand in.

“Colmcille were waiting a long time, since 1958, to bring home the Sean Connolly Cup,” she told sympathisers.

“Eugene came and spoke with our players on how best to win a county final and, thankfully, with his guidance we achieved this in 2008.”

“He was immensely proud of Colmcille taking the title after waiting 50 years.

“It would be a nice dream to think Colmcille could honour Eugene by bringing back the Sean Connolly Cup this year.”

Laying his obvious passion for sport to one side, there was mention too of one facet of his life which never got the credit it perhaps deserved.

“Eugene was a great advocate and supporter of St Christopher's and Fostra which benefited many special children, their parents and indeed in giving local employment,” added Ms O'Reilly Keenan.

“Colmcille remembers Eugene as modest, passionate gentleman who did so much in a very unassuming way.

“He did not seek any recognition for his achievements, only to give glory and honour back to clubs and communities.”

There was wholesome praise too from the Colmcolle club member, on behalf of Longford County Board, as she publically saluted the Mc Gee family for Eugene's contribution to the GAA world and his work in bettering the amateur sport.

“Thank you Marian, Linda, Conor and all the McGee family for supporting Eugene in providing us with so many memories which are treasured possessions for us all,” she added.

In the wake of those tributes, the funeral cortege made its way from the church to its adjoining cemetery for burial.