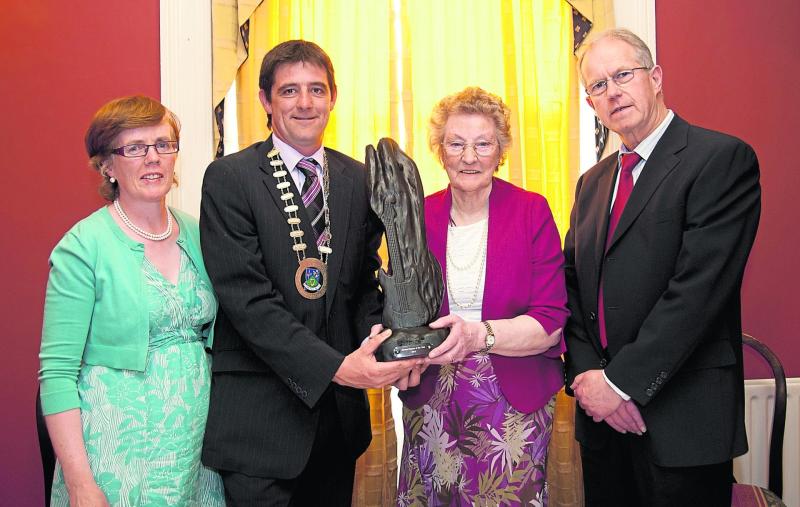 Even though she was not a native of the town, Josie O’Rourke, who died on April 30, was the perfect ambassador for Granard.

She was born and raised.

less than six miles out the road in Mullahoran, a place she remained fiercely proud of and connected to all her life. But Granard was her passion.

For many years she documented the comings and goings of Granard town as local notes correspondent for the Longford Leader.

Births, deaths, marriages, new businesses, issues of local concern and events were all diligently recorded and submitted to the Longford Leader every week.

She was perfect for the role. She knew the comings and goings of the entire town and she was wildly protective of its reputation. Any article perceived to be unfair to Granard in the Longford Leader would almost certainly lead to a stern phone call from the Granard correspondent.

They married and moved home where they ran a bar in Granard before moving to Gowna to run a Bed and Breakfast while rearing their four children. After Joe’s death 33 years ago, Josie moved back into Granard where she quickly became involved in the fabric of community life in the town.

She devoted much of her time to myriad local organisations with a view to improving Granard and the lives of those who lived in it.

She loved traditional music and was a devoted member of Granard Comhaltas Ceoltoiri Eireann throughout the years. She was one of the key protagonists behind the development of the Granard Harp School. She saw many outstanding musicians pass through the festival competitions over the years. She was particularly proud when local talent performed well and she ensured they received the publicity they deserved.

She was a very worthy winner of the Comhaltas Ceoltoiri Eireann (CCE) Gradam Award in 2012 in recognition of her contribution to CCE.

“Our music is our heritage,” she told the Longford Leader in an interview at the time. “You can go into any country in the world and find a branch of CCE today.”

She was herself an accomplished set dancer - working as a teacher and adjudicator for many years. She was also a member of the local choir.

She was an active member of the Granard ICA guild and was V.C.O. at Federation level for a three year period. She was a great believer in the organisation, not just as a way to meet people but also an avenue to learning new skills and information.

Over the years she was involved in organisations such as Community Games and other parish groups and events. She was also involved in Positive Age Mullahoran and the Mullahoran Apostolic Society. She was a big supporter of St Christopher’s and raised funds for the organisation for many years by taking part in the Women’s Mini Marathon.

She was hugely interested in GAA and was very proud of the fact that her sons Vincent and Kevin both played for Longford in their time.

In 2013, she was delighted to be named as Granard Person of the Year. Speaking to the Leader at the time, then Mayor John Maguire explained that Josie had won the award because she “deeply cares about Granard and about everyone around her, and her efforts over the years to make the lives of people around here, better, is deeply appreciated by all of us.”

She was a great neighbour and friend to many people in Granard. She was generous and good-natured and always willing to stand for a chat.

And a conversation with Josie was always lengthy and highly entertaining. She was clever, witty and as sharp as a tack. When I was working as a junior reporter for the Longford Leader, she knew I had to pass through Granard on my way home to Mullahoran and she certainly made sure I would not miss any launches, events and meetings in the town on my way out the road.

But every conversation with her would invariably turn to her beloved family. She was tremendously proud of her children and their achievements in life. Her grand-children and great grandchildren were also a source of much joy to her. Their loss is the greatest for she was at the heart of their family and they were the centre of her world.

Predeceased by her husband Joseph, son Eamon, brothers Micheál and Edward, she is survived by her sons Kevin and Vincent, daughters Eileen and Joanne, daughters-in -law, Eileen’s partner Paul, grandchildren and great grandchildren, family and wide circle of friends. She was laid to rest in Granardkill Cemetery on Friday May 3 after Funeral Mass in her beloved St Mary’s Church in Granard, just yards from her house on Church Hill.

She summed up her life in characteristic witty and succinct fashion in 2012 when talking to the Longford Leader after she received the Gradam Award:“I’ve had a fantastic life,” she said. “A good marriage. Times could have been hard but I really knocked enjoyment out of life.”

Ni bheidh a leithéid arís ann. May she rest in peace.