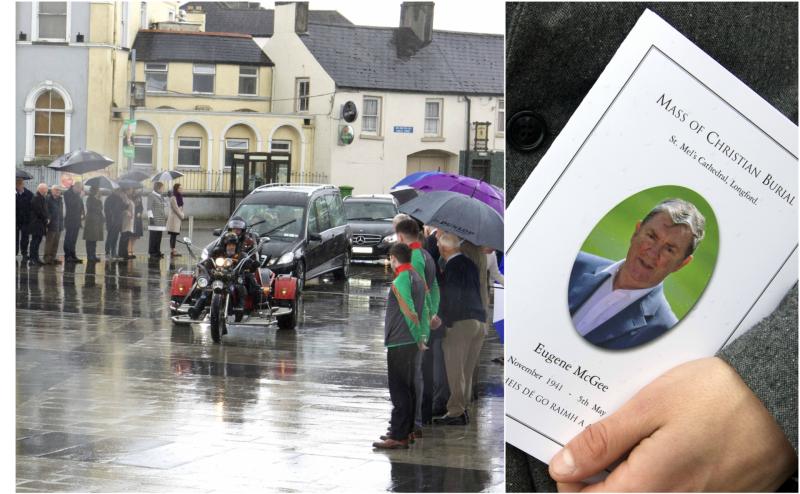 GAA legend and renowned sports journalist Eugene McGee has been remembered as a proud family man who left an indelible mark on a game which made him one of its most revered and decorated names.

PJ Cunningham, a colleague and close personal friend of the 1982 All-Ireland winning football manager, told mourners of how, despite his many professional triumphs and accomplishments over the years, the proud north Longford native never let grandeur or propriety get the better of him.

“Most you will either have known Eugene either personally or through his writings and one thing I know for sure is if you do you will know that he hated pomp, he hated bombast,” said Mr Cunningham as he addressed onlookers inside a thronged St Mel’s Cathedral.

A former Offaly player himself, Mr Cunningham rhymed out the many teams his long time confidant had enjoyed success with, most notably his role in steering The Faithful County to All-Ireland glory in 1982.

“When you think of all the teams Eugene was involved with and successful with, Newtowncashel, Colmcille, Cavan, UCD and Offaly, what does that tell you about Eugene McGee?” Mr Cunningham asked.

“He knew how to find talent and harness talent.

“Eugene had ingenious ways of getting his point across.

“If you didn’t know Eugene McGee, he would appear a  bit gruff, maybe self absorbed. But as those of us who knew Eugene, far from being self absorbed or gruff, Eugene was kind, caring and considerate.”

A lengthy guard of honour lined both sides of the entrance to St Mel’s Cathedral as the cortege which was led by a stream of motorbikes from Freewheelers MC Ireland in recognition of Mr McGee’s daughter Linda’s affection for the sport.

Inside the near full to capacity Cathedral, a host of famous names led by former Taoiseach Brian Cowen, Dublin manager Jim Gavin and former All-Ireland winning managers Sean Boylan and John O’Mahony sat among the congregation.

In making reference to the occasion, Mr Cunningham said it bore poignant hallmarks to those of 37 years earlier when his Offaly side helped prevent Kerry claiming an historic five-in-row.

“Eugene in a similar way had a race against time with seven minutes to go in 1982 when he sprung Seamus Darby from the bench,” he said.

“Last Saturday he had an All-Ireland win and that All-Ireland was to see you (Saoirse) officially welcomed into the McGee family.”

That was followed by emotional sentiments from son, Conor as he revealed how he had broken the news to him that he was to become a grandfather.

The late Mr McGee was later brought back to his native Colmcille before being laid to rest inside the grounds of its local cemetery.