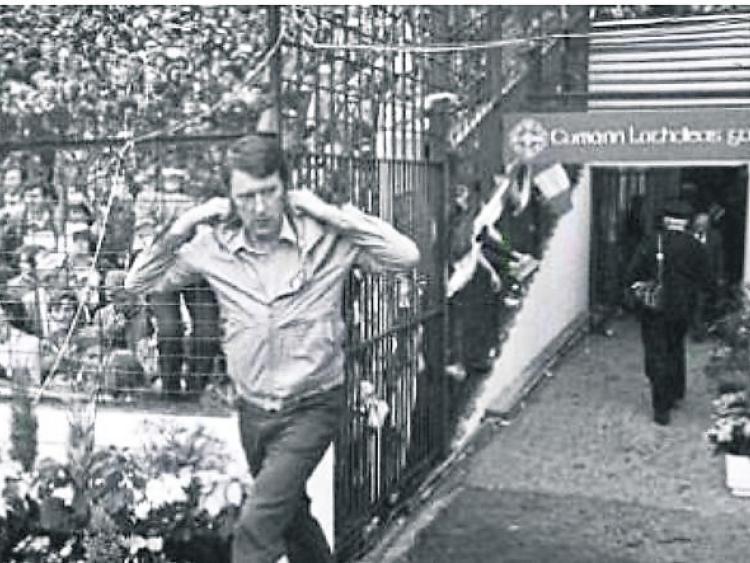 Managerial mastermind: Eugene McGee steps out onto Croke Park on September 19, 1982 as he guided his Offaly team to glory over Kerry in the All-Ireland SFC Final

People throughout the country are mourning the death of All-Ireland winning manager, Eugene McGee.

Tributes have poured in for the man who masterminded Offaly’s upset of Kerry in 1982, to deny them of a historic five in a row All-Ireland titles as his adopted county captured the crown. That wasn’t where McGee’s footballing success ended either, as he also helped Offaly to three Leinster titles, as well as coaching UCD to six Sigerson cup wins, two All-Ireland club titles and two Dublin championship titles.

Many members of said Offaly team of 1982 have paid glowing references to the man who transformed the fortunes of Offaly GAA and etched his name into GAA folklore.

One such member to laud his former manager was All-Ireland winning captain Richie Connor, who praised Eugene’s dedication and passion for GAA.

Richie said, “Eugene was very much part of our football careers and it is a sad loss...He was a very good manager and very helpful to players.

“As team manager, he would have done everything to ensure the best them was on the field on the day.

“Eugene when it came to football, he was totally dedicated. We were lucky to have him for those few years.”

Richie noted that Eugene was not only passionate about football, but also helping others and said he always looked after the players first.

“He was very honorable. He would have been helping lads, even when he gave up managing Offaly, people would still go to him for advice and help. He was a man of great integrity and of greatness.”

Adding to the praise was Seamus Darby, the man who scored the goal that rocked the Kingdom in 1982. Darby described his shock at the news, before stating Eugene as the main reason Offaly won the All-Ireland title in 1982. He also praised Eugene's tactical wisdom.

“We were very lucky to get him when he was available. Only for him we’d have no All-Ireland in fairness to him.

Sean Lowry, who also played under Eugene on the 1982 title winning team, lauded Eugene for his genuine love of the game and described him as a humble man.

“He wasn’t cavalier, he was a humble kind of a man...What I used to love about him was he never did it for money or anything.

“The one thing he would love on his epitaph would be, regardless of anything he did in business or anything else, he was a former All-Ireland winning manager and he was up there with Mick O’Dwyer and Kevin Heffernan, two of his idols and I’d say that’s his biggest achievement

“I think I’d know Eugene McGee well enough to know that that’s what he was proudest of.”