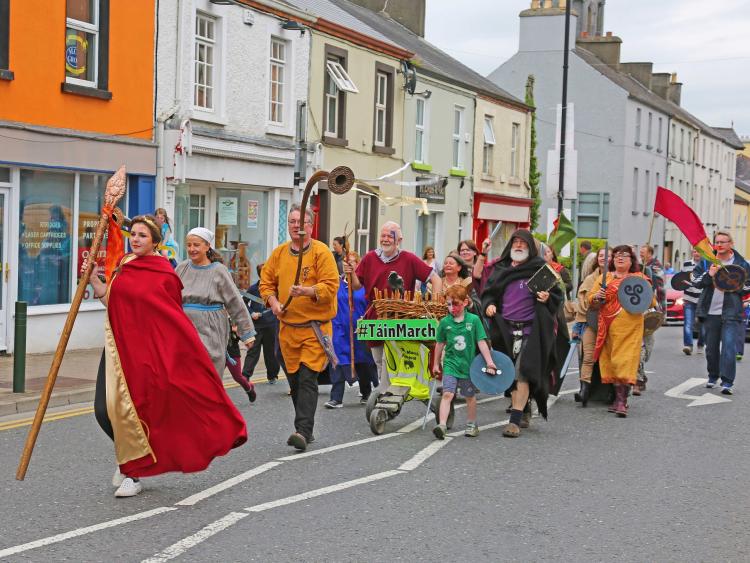 An Táin Bó Cuailnge or the Cattle Raid of Cooley is the most famous of Ireland's ancient sagas and is Europe's oldest recorded vernacular tale, said to date all the way back to the seventh century AD.

It tells the story of a great cattle-raid and invasion of Ulster by the armies of Queen Medbh of Connacht, seeking to take by force, the great brown bull of Cuailnge.

Every year, there is a celebration of this legendary tale as the Táin March makes its way across the country, following in the footsteps of Queen Medbh and her army.

Established in 2011 as a community walking festival, the Táin March celebrates and promotes the epic tale, while getting people involved in an enjoyable festival of community events.

This year's festivities will take place in Longford town on Saturday and Sunday, May 18 and 19, and in Granard on Thursday and Friday, May 23 and 24.

The 2019 Táin March Festival in Longford is dedicated to the celebration of Ireland's warrior women, including not only Queen Medbh, but other powerful females in myth, legend and contemporary society.

It makes up part of the much larger cross-country walking and re-enactment festival which stretches from Rathcroghan in Co Roscommon to Cooley in Co Louth.

The Táin March, led by the Longford Queen Medbh, will arrive into Longford town at 2.30pm on Sunday, May 19.

Read also: Over 1,000 Longfordians show their support to Darkness into Light in 2018

Welcomed by her Longford warriors, Medbh will proceed through the town from Connolly Barracks to the Ceremonial Centre where her army will have a feast, hear music, take part in Celtic costume workshops, storytelling, facepainting and discussions on the unique history of the Táin.

The procession will be announced by the sound of Ceremonial Iron Age Trumpets bringing music archaeology to life and calling all the warriors of Longford to join Medbh on her quest.

The organisers of this year's Táin March in Longford are currently searching for a Queen Medbh to lead the army through the streets.

Organisers are also seeking two local musicians to sound the great Iron Age trumpets of Ireland Medbh leads the march through the town.

There will be a wide variety of events taking place over two days including a Celtic Costumes workshop on the Saturday led by local artist Phil Atkinson of Mide Street Theatre.

The workshop will allow participants to create costumes, swords and shields for use in the Táin March and for various costume competitions which will take place on Sunday.

This year's Queen Medbh will be selected on the Saturday and presented with her ceremonial shield and spear, created especially for the occasion by Longford Woodturners.

Following the ceremony, there will be a performance from Candlelit Tales of Women of the Woods.

Festivities really get going at 11am on Sunday morning when the Táin March is welcomed into Clondra by Queen Medbh and her gathering of warriors before they march onwards to Longford, arriving at approximately 2.30pm in Longford town.

All of the Táin events are free of charge and are open to everyone.

From crafts workshops, poetry and art exhibitions to traditional music and storytelling, there is something for all the family at this year's Táin March Festival.

A full list of events, workshops and celebrations can be found in the festival programme.

Read also: Bookworms to descend on Delvin Book Festival in Westmeath on May 5