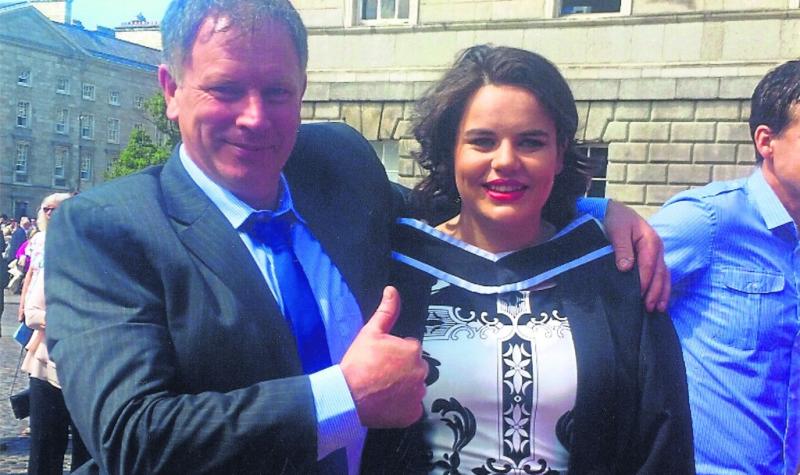 The heartbroken parents of a Co Longford woman who died from a rare strain of meningitis have issued a heart-rending plea to Health Minister Simon Harris to provide state funding for a potentially life-saving vaccine in order to prevent other families from enduring similar heartache.

Twenty-four year old Aughnacliffe native Gemma McGee passed away on August 4, 2018, less than 36 hours after falling ill at an apartment she had recently moved into in Mullingar.

Described as “a wonderful young woman and the light of our life” the Trinity College graduate and geologist had been planning to take in a three day INDIE concert in Cork along with her two cousins before tragedy struck just hours later.

Gemma started getting sick at around 12 midday with symptoms of a stomach bug and by midnight Gemma lay unconscious on her apartment floor as her condition quickly deteriorated.

In a further revelation, her parents John and Rosaleen have outlined how for several months they have campaigned to the health department for increased awareness of the ACWY vaccine.

“Unfortunately for Gemma it was a Bank Holiday Friday night and no ambulance was available at Mullingar Hospital,” said Rosaleen, adding that an ambulance was dispatched from Tullamore.

Rosaleen and her husband managed to drive from their north Longford home and arrive at Mullingar’s Midland Regional Hospital approximately 15 minutes before their daughter was ushered in on a trolley.

“When the paramedics arrived, she had sepsis but they couldn’t treat her with the lifesaving antibiotics,” added John. Sepsis needs immediate antibiotics treatment only advanced Paramedics or doctors can give.

“We left our home in Aughnacliffe in Longford after the call at midnight. We headed for Mullingar hospital, a 40 minute drive away and managed to be there 15 minutes before Gemma arrived at 1:15am,” said John.

As hospital medics desperately tried to stabilise Gemma, Rosaleen told of how her three brothers told their beloved sister to ‘keep fighting’ while her husband asked for his daughter to be transferred to a Dublin based hospital.

At 7.30pm on Saturday evening Gemma was eventually transferred to the Mater Hospital in Dublin.

Less than three hours later, the McGee’s worst nightmare was realised with a doctor informing them that their precious Gemma had passed away.

“She was a fit, healthy and very independent young woman who worked extremely hard to achieve all her goals,” said Rosaleen.

“She had recently moved into a new flat in Mullingar, bought her car and had a great job. It just didn’t make sense something like this could happen.

In shock and overcome with grief, John and Rosaleen only discovered Gemma had contracted meningitis a staggering three days after her passing.

“We were left stunned at what had just happened,” said Rosaleen.

She continued, “We didn’t understand how she could have died from sepsis and there were no answers. For the days that followed Gemma’s death we were in complete shock. The hospital staff both in the Mater and Mullingar Regional hospital tried desperately to save Gemma's life.

“On the Tuesday, we received a phone call from public health informing us that Gemma’s bloods had come back positive for meningitis.

“Nobody in Mullingar hospital had even mentioned Gemma had meningitis before she died.”

A public health team later arrived at the McGee family home to administer antibiotics while a vaccine called ACWY, something Rosaleen had never heard of before, was provided to prevent the spread of Meningitis W, the strain contracted by Gemma.

This vaccine, despite being freely available for children from 14-years-old and upwards in Northern Ireland since 2015, is not accessible to the public this side of the border.

In a bid to highlight the anomaly and due to the intervention of Longford County Councillor Peggy Nolan, the McGees held talks with Mr Harris during the Health Minister’s recent visit to St Joseph’s Care Centre.

“We have been working at this for months and months,” said John.

“We handed him (Health Minister) letters from Critical Care doctor and public health officials calling for the vaccine to be brought in the Republic.

“Our main question to him was: ‘How many people have to die before this vaccine is made available to us and why the health department has not made awareness.”

The apparent lack of availability of an ambulance in Mullingar has also sparked calls for a review to be undertaken by the Health Minister.

Cllr Nolan said the Wicklow TD had been taken aback by the tragic circumstances surrounding Gemma’s death and the sense of sincerity put forward by the McGee family in telling their story.

“In my lifetime I have never met people with so much dignity in the face of such adversity,” said Cllr Nolan, whose fellow local election candidate and party member Garry Murtagh has also been in close contact with the McGee family.

Cllr Nolan added, “What that family had to go through was just outrageous. Secondly, the minister made a promise in Longford to the family that he would go back and engage with the HSE to make the vaccine available nationwide.”

She also called for an awareness campaign to be rolled out nationwide with a view to informing parents about the vaccine’s importance and on the strain of a disease which is believed to have already claimed seven lives since Christmas.

Meningitis symptoms are varied from vomiting, headache, neck pain, temperature and rash but you may only notice some of these symptoms.

This strain of meningitis "W" is so deadly that only one in every four people who get it survive.

For the McGees, the sense of loss and anguish is one which goes on. Their only solace, according to Rosaleen, is to bring about the ACWY vaccines and expand awareness to stop other cases comparable to theirs from occurring in the future.

This vaccine is available privately and costs €50 plus cost of GP.

Read also: Flu or Meningitis….would you know the difference?