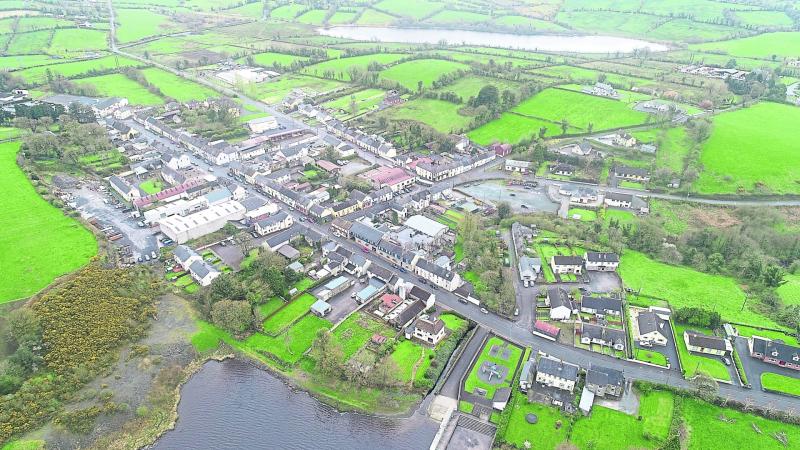 An aerial shot of Arva, a thriving town very much in the ascendancy. Picture: Mark Cunningham

If you are looking for an example of how best rural towns are fighting back in their attempts to keep pace with Ireland’s so-called economic recovery, then the bustling town of Arva is surely it.

As has been well documented down through the years this lively, scenic, market town has long been heralded as a locality where the three provinces of Ulster, Leinster and Connacht meet.

It’s a distinction which its provincial contemporaries can only dream about, let alone build a community around.
But there’s more to Arva than just its eye-catching beauty and strategic location.

There’s a refreshing zeal to the place, a perception which is perhaps best evidenced by the many voluntary based organisations which have brought the town to where it is today.

One of those is its assiduous Town Development Association.

Set up in the 1960s by an eclectic mix of community and local business members, the group’s mantra of ‘By the Community, for the Community’ is one which has remained steadfast throughout its long and distinguished history.

“It’s all voluntary and we would have roughly 25 members attending meetings on a monthly basis,” explained its chairperson, Noel Lynch.

With a weekly lotto and bingo in operation for six months of the year, both channels have, together with local authority and EU Leader funding, enabled it to home in on a range of key infrastructural projects.

A €40,000 investment on the development of an eye-catching jetty at Gartylough has been front and central to those endeavours.

Add in the €100,000 spent on the upgrading of the town’s Market House alongside the refurbishment of five apartments and suddenly you get the impression that here is a town very much going places.

“The apartments were developed by a great team 20 years ago and with them being upgraded just recently we will be letting them out to holidaymakers and fishermen,” added an upbeat sounding Noel.

Sitting inside a meeting room of another recently completed redevelopment at the town’s plush looking Breffni Arms Hotel, it’s not hard to be enthused by the plans Noel and others are continuing to strive towards.

“There’s no doubt that things are positive in the town and things are moving.

“We are here in the hotel which has been done up in recent times, that caters to a lot of functions and which is a great asset to have.

“We also have a new butchers after opening up. Sean Donnelly opened up a new premises in the town which is very striking as you approach it and we also have a big development going on in the local supermarket (Keith’s).”

Impressive indeed, especially when you consider even the closure of the town’s Ulster Bank branch last year has since been counteracted with the building being snapped up by the local credit union.

A short walk down to the foot of the town along the Aughnacliffe Road a fleet of JCBs and other heavy duty vehicles can be seen, the results of which GAA aficionados hope will bring about a new, state of the art pitch and clubrooms.

Again fundraising has been very much to the fore. The launch of a novel OsKaRs event last weekend in the lead up to its July 26 premiere remains a fundamental part of that drive.

And with the whiff of quiet satisfaction still very much in the air following on from the town’s hugely successful St Patrick’s Day Parade, the dreaded mention of Brexit even fails to rouse a negative reaction.

“It’s not something that concerns me really because the people that’s over that hasn’t much of a knowledge of it either,” said Noel.

“We are trading well in Arva, the town is very much open to do business and I’ve said it before but anything that can’t be got in Arva will go out in a very small bag.”

Sitting across from Noel is the man who for the past 40 years has provided accommodation and top class hospitality to thousands of visitors and tourists.

Eamonn Gray is more than just your quintessential hotelier though. Never afraid to muck in be it as front of house or behind the bar, here is a man who oozes likeability and all round decency.

It’s a far cry from the bleak days of late July 2013 when a suspected arson attack cast a shadow over the hotel’s future.
Fast forward the best part of six years, the hotel couldn’t be in better shape thanks to a refurbishment which has seen it underpin its status as one of the ‘go to venues’ throughout the north midlands and beyond.

“Since probably 2016 there has been a steady increase (in tourists to Arva).

“This year could be a little affected by Brexit but like Noel said it’s there and that’s it.

“You have to work with what’s there; you have to take things on and just go with it.”

One feature which has loomed large on the town’s local economic blueprint has been its ability to attract angling enthusiasts from across the Irish Sea and mainland Europe.

“Fishing is a very important part of Arva’s tourism and to towns like us because we don’t get the mainline tourists that are sent south or stay in Dublin and the likes of Kerry, Galway and the west of Ireland.

“But they are gradually coming in a little more since the Blueway and Wild Atlantic Way was developed.”

A major catalyst behind that gradual turnaround has its roots firmly steeped in what has become arguably one of the preeminent social attractions of the local calendar-the 3 Province Festival.

Headed by its chairman Emmet Sloane and proprietor of local watering hole The Brewery, this nine day extravaganza has everything from quiz and heritage nights to football blitzes, raft races and buzzing markets.

This year promises to be no different with famed luminaries from the world of country music such as Eamon Jackson and Johnny Brady both pencilled in to feature over the course of the nine days.

“People like to see things going on but they don’t happen by chance,” said Philip Brady, one of the chief protagonists behind the unrivalled success of the Breffni 3 Province Challenge.

Last year, the event broke the €1m barrier since its inception in 2001, an incredible feat for any voluntary led fundraiser to amass.

“You have to work behind the scenes and there has been a great community in Arva involved in a wide variety of groups.

“It shows because it has brought a lot of people to the area but then again there is lots of competition out there.

“We feel with the confluence of the three provinces we are well located too.”

Like Noel and Eamonn before him, Philip’s sense of pride and self satisfaction in a place he duly calls home is energising.

And why wouldn’t he, especially when you consider his other role as chairperson of the town’s hall committee, a building which is earmarked for a €400,000 major redesign.

“There is a very soft border around here,” came the whimsical reply.

“It’s the willingness of people to come together and work together which is key.

“In Arva when you have committee meetings you can gather people round to help and that has been what has sustained us.”

That same ethos can be likewise levelled at the town’s long established and highly respected St Mary’s National School.

A mainstay at the facility for the past 16 years, its principal Edel Cadam has been widely credited with upholding that standing.

“We are involved in a lot of things,” said the amiable Aughnacliffe native, name-dropping a community walk and a grandparents day as two such highlights.

Formerly a three teacher school, the addition of new classroom facilities in response to a steadily increasing local populous has, like the town before it, allowed the school to blossom.

“We have a lot of things a small town wouldn’t have, even the likes of a library which we use every week not to mention the football pitch which will be a great development.

“With the Tidy Towns doing so much work too there just seems to be a great go and get attitude which really goes to show that Arva is a town that’s definitely on the up.”

From the umpteen advances this dynamic, forward thinking locality has made to date, its a sentiment few, if any, could argue with.