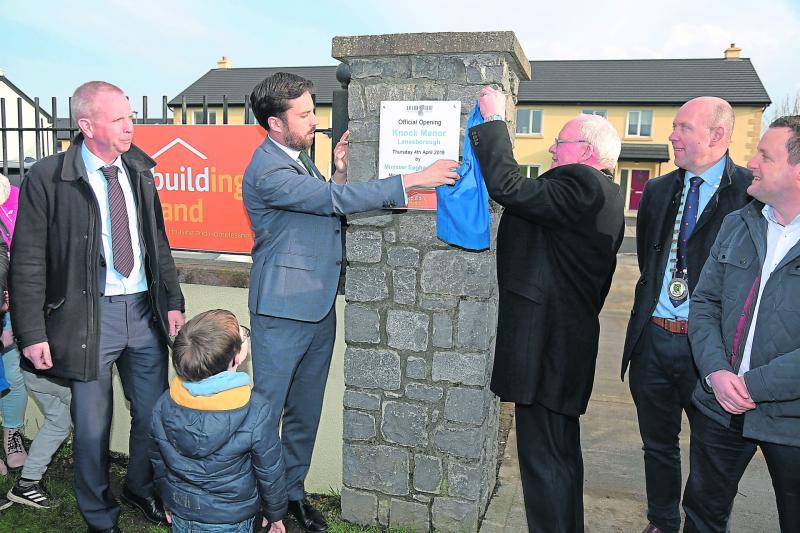 The project was first announced in March 2018 and it was confirmed by John Brannigan, Director of services Longford County Council, that the project came in ahead of deadline.

“The construction of these started last April in 2018. So in under 12 months, 33 houses were delivered here. That is an achievement of a house and a half per week,” John Brannigan stated.

The project came in just over the €6m budget, at a final cost of €6.74million.

“In 2018, this council delivered 127 new houses, 54 new builds, 28 acquisitions and 45 leases, which includes the 33 houses here at Knockmahon. These 33 houses were delivered by North Longford local contractors, Pat Faughnan and the Mulleady brothers, at a cost of €6.74m,” Cllr McEntire stated.

Cllr McEntire spoke of the importance of works such as these to Longford county.

"Minister, this is your second visit to the county in over a week and we are extremely grateful for your interest in our county and the work we undertake," stated Cllr McEntire.

“Local government provides a wide range of functions that impacts on everyday life. One of those is the provision of family houses.

“It is extremely important that families have secured modern accommodation as a step in building sustainable communities, ” Cllr McEntire added.

Minister Murphy spoke of his delight at being able to officially open the estate and commended the work carried out.

“Home is where the heart is and for me as Minister for Housing getting to come here today, meet all of you and see your new homes, is one of the most special things I get to do in my job,” remarked the Minister.

“The homes we are building up and down the country are the best homes we have ever built in terms of public housing. I really want to thank the builders and the developers for the really strong work they have done.

“I also want to thank John Brannigan, Paddy Mahon and all of the housing team for putting this all together and getting these homes done so quickly,” he concluded.