The 'Sweetest Thing' as Bono visits Keenan's in Tarmonbarry 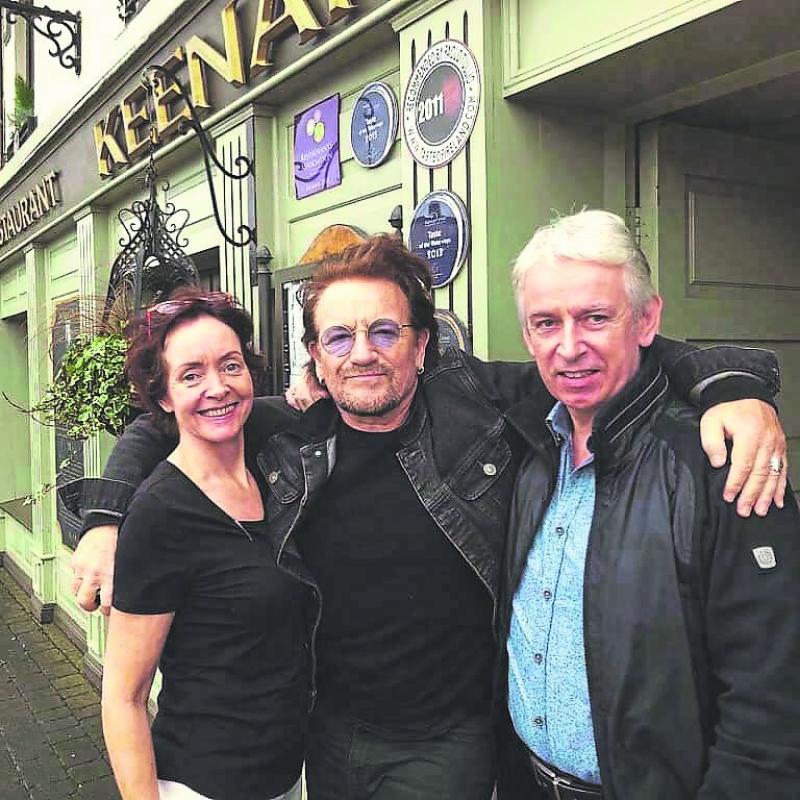 A 'beautiful day' in Tarmonbarry as Bono says hello

Annette and Barry Keenan, the owners of Keenan’s hotel bar and restaurant in Tarmonbarry, were ‘stuck in a moment’ to remember on Saturday, March 16, as they welcomed a guest to their restaurant who is more familiar to the ‘city of blinding lights’ than Co Longford.

The owners were in shock as Paul Hewson, otherwise known as Bono, appeared on the doorstep of their award-winning premises at 11am on Saturday morning.

“We had just opened and he was actually our first customer in,” Annette Keenan told the Leader.

The Keenans couldn’t believe their luck as Bono stopped by for a bite to eat with his wife, Ali, a chat and some photographs.

“They came in, sat down and had a light lunch. He was very accommodating, taking photographs with us and staff members,” Annette beamed.

As it happens, the international superstar was passing through on his way to visit some friends in the west. The Keenan family must be doing something right as this was actually Bono’s third visit to their restaurant.

Annette: “It is his third time here. We already have his picture up on the wall from his previous visit.”

This is not the only celebrity to grace the doors of Keenan’s in recent days, as RTÉ’s Mary Kennedy also dropped by on Monday March 18. There must be something 'magnificient' in the water in Tarmonbarry.