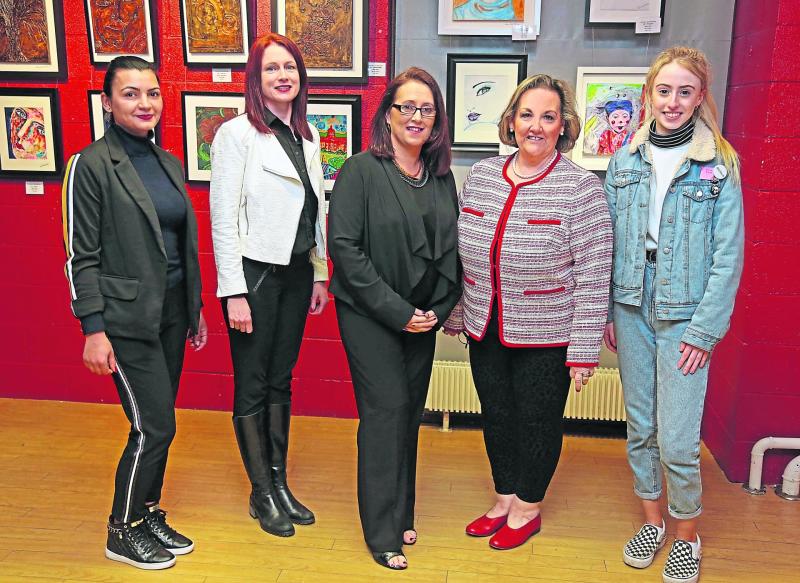 A combination of art, music and words made for an uplifting and entertaining International Women’s Day celebration in a packed Longford Library on Friday.

Laura’s young daughters sang beautifully and their crystal-clear harmonies set the tone for the celebrations. Laura spoke of the women who had encouraged her work especially Cllr Peggy Nolan and Longford county librarian Mary Carleton Reynolds.

Cllr Peggy Nolan told the audience that International Women’s Day is not about stars and celebrities. “It is about ordinary women, our grandmothers, our mothers,” she said.

She spoke of the women of Longford town, including Dr Pettit of Keon’s Terrace. “She turned no-one away. She took bags of turf and vegetables as payment,” Cllr Nolan recalled.

The exhibition was launched by Sheila Reilly, chairperson of Longford Women’s Link, who highlighted the emotionally charged nature of Laura’s work and how creativity can drive us to make change.

Four women spoke about their lives, including Nia Gallagher, who talked about the work of Longford Comhairle, Petura Marin, who outlined moving to Longford from Romania and getting support from Longford Women’s Link; Mags McKenna, who spoke about starting college in her 50s, and Kitty Hughes, who reflected on her life growing up.

Longford Voices United Gospel Choir performed, finishing with Happy Day, an appropriate choice for the day that was in it.
Meanwhile in Ballymahon, Bridgeways Family Resource Centre also hosted an event for International Women’s Day, organised by Bridgeways Women’s Group. This well-attended event included an array of entertainment such as birds of prey, caricature and face- painting.

One of the main talking points of the event was the opportunity for the local community to come together to voice their concerns within the area.