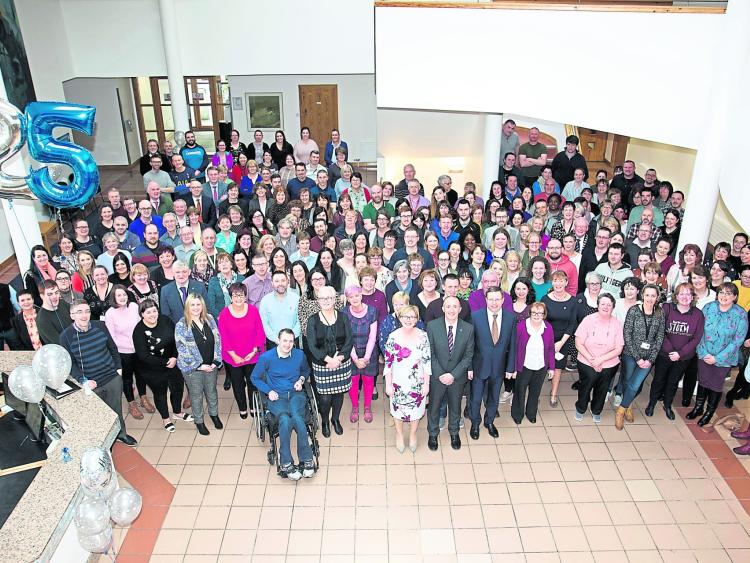 The crowd that gathered at Longford Government Offices on Friday to celebrate the 25th birthday of the opening of the offices with Minister Regina Doherty TD. Photo: Michelle Ghee

There was a great 'buzz' and 'positive atmosphere' at the Longford Government Offices' 25th-anniversary celebrations on Friday afternoon as staff past and present gathered to celebrate the big birthday.

Minister for Employment Affairs and Social Protection, Regina Doherty, TD, who attended the celebrations, noted the excitement in the room during her speech at the Government Buildings earlier today.

To mark the 25th anniversary of the offices, the Minister unveiled a plaque in memory of deceased colleagues and friends who worked in the offices.

“Just over 160 staff from this Department first moved to these offices in November 1993 and the building was officially opened by the late Taoiseach, Albert Reynolds TD on February 25, 1994,” outlined Minister Doherty as she addressed the large crowd.

“Since then the number of staff in the building has increased and there are currently just over 400 Department staff working in the building, in both the Centralised Schemes Office and in the local Intreo Centre.

“The Department’s staff working in this building provide essential assistance and supports to our citizens on both a national and a local scale and it is very important that we recognise today all that has been done in this office over the last 25 years, and look to the future with confidence in our ability and determination to continue to do so in the coming years.”

Minister Doherty added that it is important to recognise that the building itself is more than just a place of work, with people from different parts of the country coming together as more than just work colleagues.

“It is a place where friendships - and more serious relationships - have been made and those bonds of friendship and collegiality extend beyond the walls of the building itself as can be seen from the number of former staff who have come here today,” said the Minister.

“Those bonds of friendship are important in good times and in bad. As friends, we celebrate the happy occasions and are there for each other when we are needed. I think it is very fitting that on a day like today we also remember friends and colleagues who have passed away.

“I would like to acknowledge the valuable work and dedication you have shown over the last 25 years and recognise the contribution and the difference this Office has made, not just to the thousands of customers you serve on a local and a national basis, but to the towns and communities in which you have set up homes, raised families and contributed in a deep and meaningful way to the social fabric of this country.”