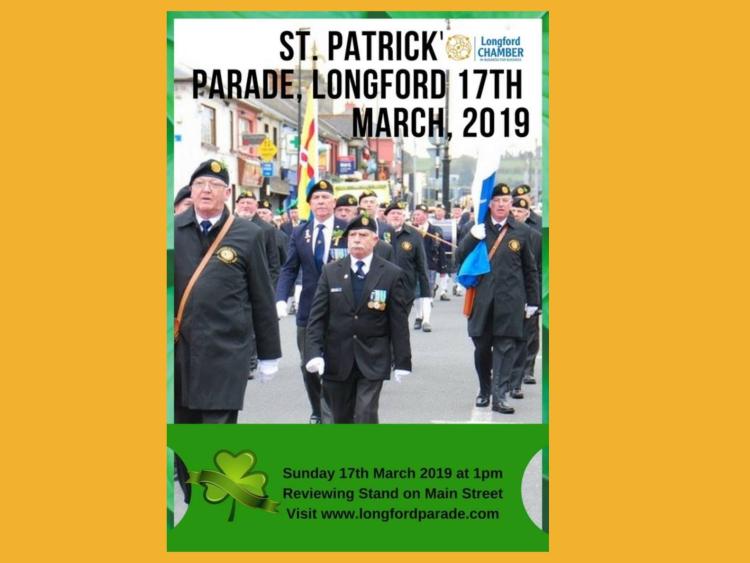 The Longford St Patrick's Day parade will go ahead as is tradition on March 17.

Longford Chamber of Commerce & Industry had previously announced that the annual St Patrick's Day parade would take place on Monday, March 18, in order to avoid a potential clash with the AIB All-Ireland Club Finals at Croke Park.

However, following Mullinalaghta's defeat at the hands of Dr Crokes on Saturday last that was no longer a consideration and there will be no clash for Longford parade patrons to contend with.

The rationale for the switch to March 18 was purely from a logistical and organisational point of view but many people took to social media to express their dismay and anger over the move.

On the basis of that 'considerable feedback', Longford Chamber announced they would revisit their initial decision and this evening (Monday, February 18), they've announced that the parade will go ahead on St Patrick's Day Sunday, March 17 and not on the Monday.

Applications are being accepted online for the Longford St Patrick's Day Parade which takes place on March 17 at 1pm. To facilitate the process, this year the online form can be completed via the following LINK

No application fee applies unless you are a commercial entry. Terms and conditions can be found at the bottom of the application form link.

Visit www.longfordparade.com for full parade details and updates on www.longfordchamber.ie/parade

The theme of the Longford St Patrick's Day parade this year is 'Making it Happen' and the Grand Marshal is Pat Lynch, founder of the first parade and Past President of Longford Chamber of Commerce.

Amhrán na bhfiann will be sung by The Mulligan Sisters (www.themulligansisters.com) and the parade commences at 1pm sharp. The reviewing stand will be located on Main Street.