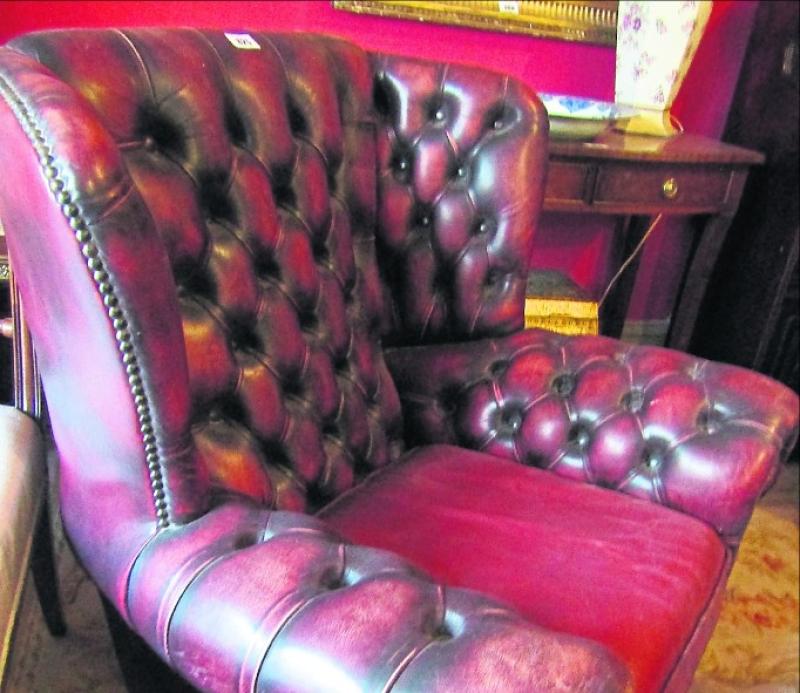 The favourite leather armchair of great Longford businessman, Pat Higgins, 'Pat the Baker', will go under the hammer at the Matthews of Oldcastle two-day antique auction.

The favourite leather armchair of great Longford businessman, Pat Higgins, 'Pat the Baker', will go under the hammer at the Matthews of Oldcastle two-day antique auction in the Duke Brothers Building, Kells next Saturday & Sunday, February 9 & 10.

ALSO READ: Using his loaf....A Twitter feast for Longford's Pat The Baker thanks to #armabreadon and #BeastFromTheEast

Mr Higgins built up his Granard business to a national concern.

Pat's 'thinking chair' is one of several lots from his home and can be described as a burgundy leather chesterfield wingback armchair with deep button upholstery.

Mr Higgins, who was originally from Kilkelly, Co Mayo, settled in Granard when he married a local woman.

He was known as 'Pat the Baker' in the town and the name stuck to the bakery business he set up in 1953.

He was a tremendous worker and involved in every aspect of the bakery, from bread quality to delivery, to the technological developments in the industry generally.

Declan Fitzgerald, general manager of Pat the Baker said, "He would have been one of the really respected men of the county and would have been known as very strong, but kind hearted. It can also be said that Mr Higgins made a great contribution to the economy of the Midlands generally.

“He was an innovative businessman at a time when entrepreneurship was less common than it is today.”

It has also been said of Pat the Baker, "He didn't break a mould, he created a mould."

The company, which employs more than 400 people, continues to be run and owned by the Higgins family.

Three of Mr Higgins's sons are involved in the company and his son and namesake, Pat, has taken on the "Pat the Baker" title.

Pat the Baker bread has received nationwide fame through the slogan "So Fresh, it's Famous", and with a series of successful and memorable advertising campaigns.

An animated television advert, which was particularly associated with Mr Higgins and ran between 1980 and 2002, helped secure the popularity of the brand throughout Ireland.

The auction commences 2pm each day.

The catalogue can be viewed online at www.matthewsauctionrooms.com

The action will be open for public viewing in Kells from this Thursday and Friday, & February 7 & 8 from 11am, and on each auction day also from 11am.