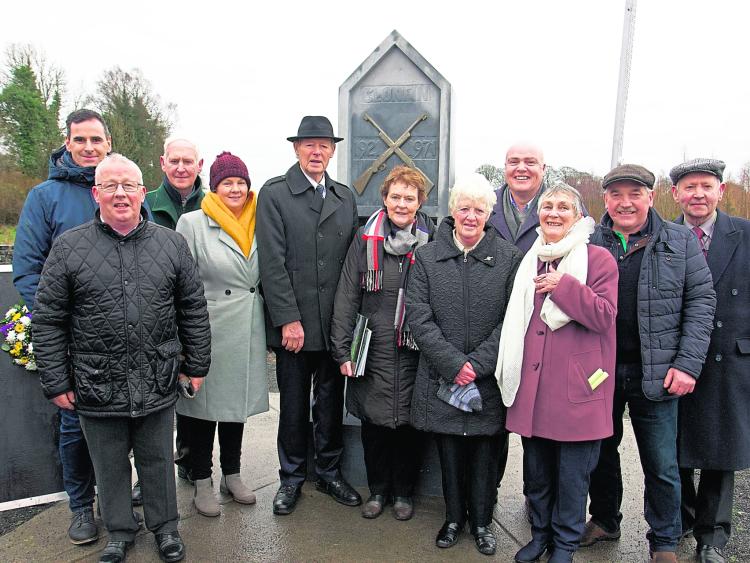 On Sunday last, February 3rd the annual Clonfin Commemoration was held and this year the committee were delighted to welcome Mícheál Ó Muircheartaigh as their guest speaker.

The large crowd that braved the rain heard the legendary commentator speak of the troubled times in our country and he said that Clonfin was up there with the best of them in our fight for Freedom.

He congratulated the committee on their efforts and encouraged them to continue passing on our history to the next generation.

After the ceremony Mícháel expressed a wish to visit Mullinalaghta who he said he was looking forward to seeing in action in Thurles on February 16. His wish was granted and Owen Devaney was delighted to bring him on a tour of the half parish.

When this was completed he stopped off at McElvaney's of Coolarty where he mingled with the young and the not so young and one, much to the intrigue and excitement of those present.

A spokesperson said: “On behalf of all we extend sincere thanks to Mícheál for coming among us and for his lovely speech and also to all who took part in the ceremony.”

Sincere thanks were also extended to all the stewards, to the teachers and pupils of Killasonna National School who called the roll of honour and sang the National Anthem, members of the C Coy 6th Battalion and the R.D.F. under the command of Lt. Robert Packenham, members of the O.N.E. the Longford Pipe Band and Cian O Farrell.

Appreciation also went the way of Eamon Shannon Spanfix Ltd, Creative Ireland, Longford Library Services, the McEvaney families and those who did the catering.

Finally, the committee wish to acknowledge the help of Longford County Council and look forward to their continued support .