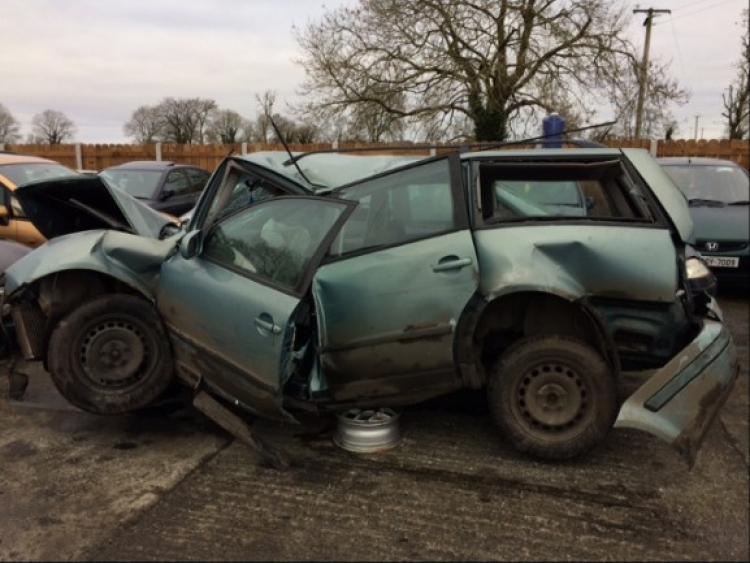 A one time elite runner has told of how her dreams have been shattered after she and her partner were rammed repeatedly by a jeep, causing their vehicle to career into a tree and wall.

Michelle McGee said she will never forget the moment she thought her life was going to end as she prepared to be dropped home by boyfriend Stephen Reilly on New Year's Eve 2016.

Ms McGee said she had wanted to gear herself up for a run she was preparing to undertake the following day.

What unfolded as the pair made their way through Ennybegs in Killoe has remained a “horrific living nightmare” ever since, she said.

“I 100 per cent thought I was going to die,” she said in her victim impact statement.

“I was praying the jeep would stop, but it didn't.

“When we hit the tree, everything went black.”

A decorated middle and long distance runner, Ms McGee had previously represented Ireland at European level and was planning on furthering her athletic aspirations before the events of December 31 2016.

“Two years on, I'm still not running and I'm still in pain every day.”

Following the incident, Ms McGee said she was forced to hand in her notice in a job she had spent the previous 11 years occupying as sleepless nights and flashbacks over the incident took hold.

She said she now cannot travel in a car with any comfort, has spent three lengthy periods on crutches as she now tries desperately to piece her life back together.

Despite those efforts, Ms McGee, who sustained fractures to both her sternum and right ankle in the crash, said she will never be able to excuse Mr Norton for his actions.

“I loved every single minute of it. I was an elite runner but now that is finished for me,” she continued, adding her feelings towards Mr Norton were full of anger and hate.

“I did not know whether I would see my family again.

“No one should die because of the cowardly and evil actions of someone else.”

Ms McGee signed off her emotionally charged statement by adding: “One thing is for sure, I will never, ever forgive and forget.”

Her partner Stephen Reilly said the sheer horror of what unfolded on New Year's Eve 2016 will never leave him.

“I think about it every day,” he said, while contending a last minute change of heart to take his VW Passat estate over Ms McGee's car may well have saved both of their lives.

“I had to look at my girlfriend on her knees in the middle of the road saying she was going to die because of the pain in her chest,” he said.

Inspector Padraig Jones said Mr Reilly had been travelling through Ennybegs when suddenly a jeep ran into the back of his car.

He said the Honda jeep driven by Mr Norton, which belonged to another man who was sitting in the passenger seat, continued to follow Mr Reilly's car at high speed as Ms McGee rang gardaí to alert them of what was taking place.

He said, as Ms McGee made an emergency call to gardaí who told them to try and make their way towards Ballinalee, the jeep continued to rear-end the Passat, eventually forcing it off the road after ramming into it a total of six times.

Inspector Jones said Mr Norton and the other man fled the scene by running through fields.

In follow up investigations, he said gardaí invited Mr Norton to make a statement on what had allegedly occurred days later and attended Granard Garda Station on January 7. However, Mr Norton declined to answer any questions over the incident and a further appointment made two days later was not adhered to.

In his evidence to the court, Inspector Jones said Mr Norton told gardaí in an ensuing telephone exchange: “You will never find me.”

In his own sworn testimony to the court, Mr Norton insisted while he could not take back his actions, he remained unremittingly remorseful for the hardship and pain he had inflicted on Ms McGee and Mr Reilly.

“I regret my actions every day,” told his defence counsel Colm Smith SC.

His rationale for giving chase to the VW Passat was, he said, down to a distorted view the same vehicle had been behind a burglary at his home some six years earlier.

“I totally misread the situation and I take full responsibility for my actions.

“I was totally wrong.

“What happened, happened. I was totally in the wrong.”

It was also revealed Mr Norton had been drinking that same evening and ventured out to purchase more alcohol when he suddenly came across the Passat which was being driven by Mr Reilly.

His partner, said they had she and Mr Norton had been together for the past ten years and were parents to two young children.

She said, Mr Norton, who came to court with €10,000 by way of compensation for both victims, was the sole breadwinner in the house.

“He pays the bills,” she said.

“If no one pays the mortgage, we will have to leave the home.”

In his summation, Judge Keenan Johnston said it was one of the worst cases of driving he had encountered in his career at the bench, saying the likelihood of a custodial sentence coming Mr Norton's way was unavoidable.

“I would not be carrying out my function if I didn't send out such a message,” he said.

Turning his attentions to both Ms McGee and Mr Reilly and wishing them well in their own recoveries, Judge Johnston remanded Mr Norton in custody until yesterday (Tuesday) ahead of sentencing.