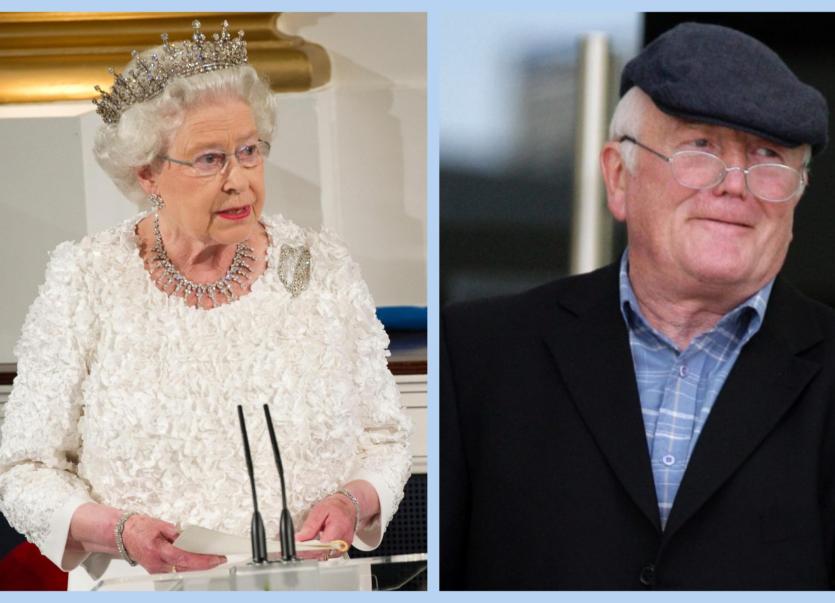 Queen Elizabeth II during her 2011 visit to Ireland and Donal Billings, who has opened an appeal against his conviction in the Irish language.

A Longford man who put a bomb on a bus bound for Dublin, and made hoax bomb threats during the Queen of England’s State visit to Ireland in 2011, has opened an appeal against his conviction in the Irish language.

Dónal Billings (67), with an address at St Bridget’s Court, Drumlish, Longford, was found guilty by the non-jury Special Criminal Court of possessing an explosive substance at Longford railway station car park on May 16, 2011.

Billings was further convicted of making false reports on May 16 and May 18, 2011, that bombs had been placed at Busáras and Sinn Féin's headquarters in Dublin and that two mortars were set for Dublin Castle.

He was also found guilty of making a false report on May 20 that two bombs had been placed in the toilets at Cork airport. The Queen of England was visiting Ireland at the time.

Sentencing him to eight-and-a-half years imprisonment, Mr Justice Tony Hunt, presiding said Billings was "perfectly entitled to hold a low opinion" of Queen Elizabeth and her visit to Ireland but "not entitled to express such an opinion by engaging in criminality." He was given concurrent jail terms for making false reports.

Billings, whose trial was heard in both Irish and English, is conducting his appeal through Irish also.

Counsel for Billings, Martin Giblin SC, submitted that the State failed to uphold his client's Irish language rights without limitation.

Advancing his arguments in Irish, which were translated into English for the court, Mr Giblin said the Explosive Substances Act 1883 had never been translated into Irish.

He said the Special Criminal Court failed to protect his client’s Irish language rights when it refused an application to provide an overnight transcript of proceedings in the Irish language. A transcript was provided in the English language, even though it was within the State’s abilities to provide one in Irish also, he submitted.

Mr Giblin said his client’s Irish language rights were “decimated” and “destroyed.” He said his client’s trial was unfair under Article 38 of the Constitution and that he did not get a trial in due course of law.

He wished to stress that his client’s Irish language rights were independent of his fair trial rights, which were the subject of further grounds.

Ronan Munro SC, also for Billings, further submitted that there was insufficient evidence that the bomb was placed on the bus in Longford.

Also advancing his arguments in Irish, which were translated for the court, Mr Munro said the charge of possession should have been thrown out at the close of the prosecution’s case.

The hearing resumes on Wednesday. Counsel for the Director of Public Prosecutions, Garnet Orange SC, is yet to make submissions.

During case management last year, Mr Justice Birmingham commented that he was having enough “difficulty finding three judges to speak English” let alone Irish, in reference to the shortage of judges the court was facing at the time.

The Special Criminal Court heard that a phone call was made to Longford garda station on May 16, 2011. The caller said there was a bomb on a Dublin-bound Corduff travel passenger bus, a second bomb on a bus at Busaras and a third bomb at Sinn Fein headquarters in Dublin.

A further phone call was made on May 18, threatening two mortars were set at Dublin castle for 8pm that evening.