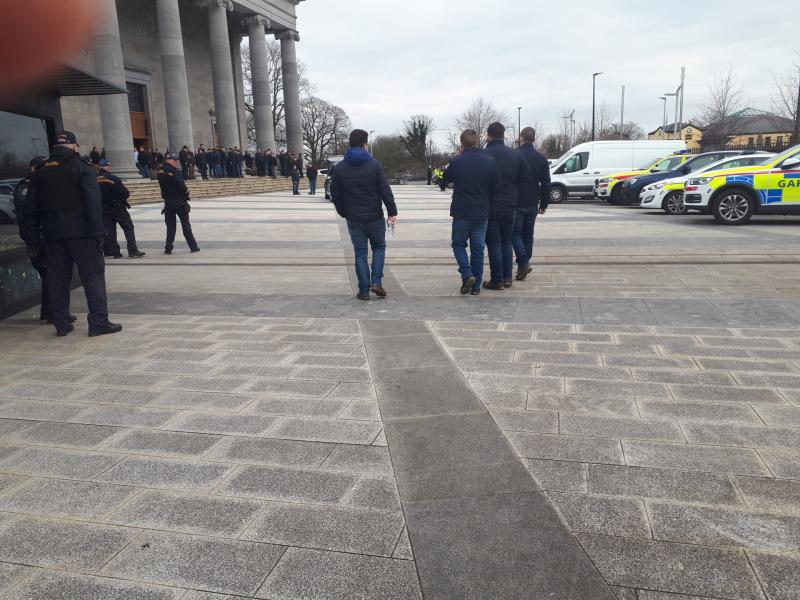 Members of the Gardaí's Armed Support Unit outside St Mel's Cathedral this morning.

A large garda armed presence is in situ in Longord town this morning ahead of a large Traveller funeral.

Several officers from the Gardaí Regional Support Unit (RSU) have been drafted into the county amid fears of an outbreak of violence.

Those fears, at the funeral of 93-year-old Maureen Stokes, were exacerbated over the past 24 hours after a man was shot and another man sustained serious injuries in a suspected hatchet attack in Galway.

Both incidents which occurred in the wake of Mrs Stokes' removal, are being linked to an ongoing feud between two rivalling Traveller factions which also resulted in another man falling foul to a suspected acid attack.

They follow similarly violent scenes almost 12 months earlier when a man was left fighting for his life in hospital in the aftermath of a car ramming incident in Ballymahon.

The victim sustained a stab wound in that incident shortly after a religious ceremony had been held to mark the anniversary mass of John 'Dodie' Stokes, a son of the late Mrs Stokes.

It's been revealed close to 60 officers are on standby for this morning's funeral proceedings at St Mel's Cathedral ahead of burial to Ballymacormack Cemetery.

Among them include members from the Garda Air Support Unit, Dog Unit, Public Order Unit as well as uniformed and detective branch members.