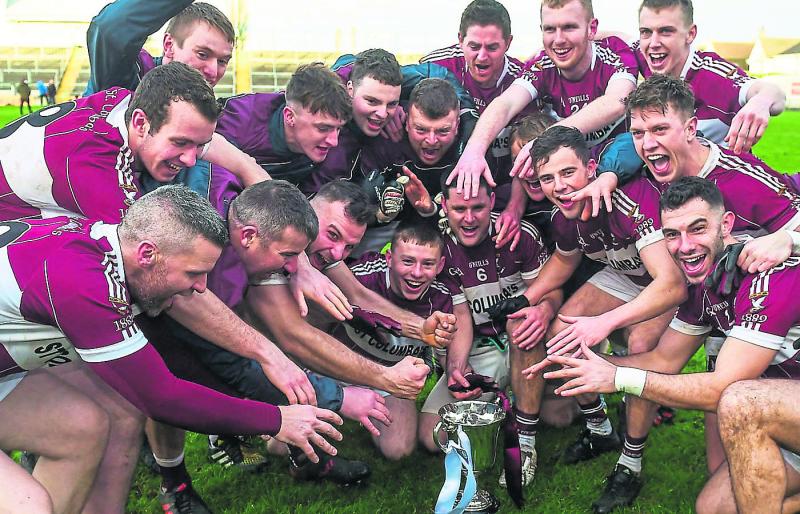 History makers...'Mullinalaghta possess a singular belief, which is felt by every man on the panel.'

Harry Truman once coined the quote, “It is amazing what you can accomplish if you do not care who gets the credit."

Achieving that mindset isn’t easy, it must come naturally.

That attitude is essentially all it took for Mullinalaghta to beat a team loaded with stars.

None more glittering than Paul Mannion, a real star who was expected by many to have a field day against Mullinalaghta.

Named at centre forward Mannion immediately switched into full forward, where the understated Patrick Fox set about his task, supremely controlled, quietly, no fuss, and after all of sixty five minutes Paul Mannion was left scoreless from play, after Fox had cleaned him out, literally.

This was the key battle on the field, and when the game was over Patrick was an unsurprising choice as man of the match.

Nobody else gave so much attention to policing his opposite number, efficiently and consistently, with such incredible unwavering focus as the full back brought to his own game.

I’ve watched Paul Mannion many times in Croke Park, and the beauty of his play, the sheer ease with which he takes scores is a joy to watch.

Mannion is no ordinary player; he is a class apart.

Not on Sunday last however. Early on he was becoming agitated, and restless, he hadn’t an inch of room, and I’m sure he was wishing he could play some other position in the forwards. Patrick Fox copper fastened his reputation by the clinical job he did, on a true legend of gaelic football.

I felt the outcome would be governed by what happened with Paul Mannion before the ball was even thrown in.

I genuinely saw that, as the battle of the game, once it started.

But Patrick Fox was not alone.

Nipping at his heels, and in some ways maybe a superior all round footballer, was Donal McElligott.

His defending was the stuff of magic, and every time he went forward he caused panic and uncertainty in the Kilmacud defence.

Others, such as Rian Brady and Jayson Matthews were constantly threatening, while Aidan McElligott in the final quarter particularly showed real class and style.

Truly, nobody on the team cares.

They just focus on the final result.

That’s why they are the first Longford Senior team ever to first appear in a Leinster Senior Club Final, but also, the first one ever in the history of the competition to win it.

That’s why they play such a wonderful, calm, unfussy game, and that’s why we have waited so very long to see a Longford team take home the cup.

Every player sees himself as a cog in the machine.

Mullinalaghta possess a singular belief, which is felt by every man on the panel. The work they’ve put in is extraordinary, by any measure in any club that I know.

They are a great example to their parish, and they never forget their families, nor is their confidence or self belief ever dented.

No sign of any foolish sense of pride but with a real close sense of what makes a parish tick.

Every final they win, the first call is to the cemetery to remember their forefathers.

Their behaviour is exemplary, and they represent their parish with humility and gratitude.

Next up: WATCH | RTE's Marty Morrissey arrives in Mullinalaghta for one hell of a Longford party