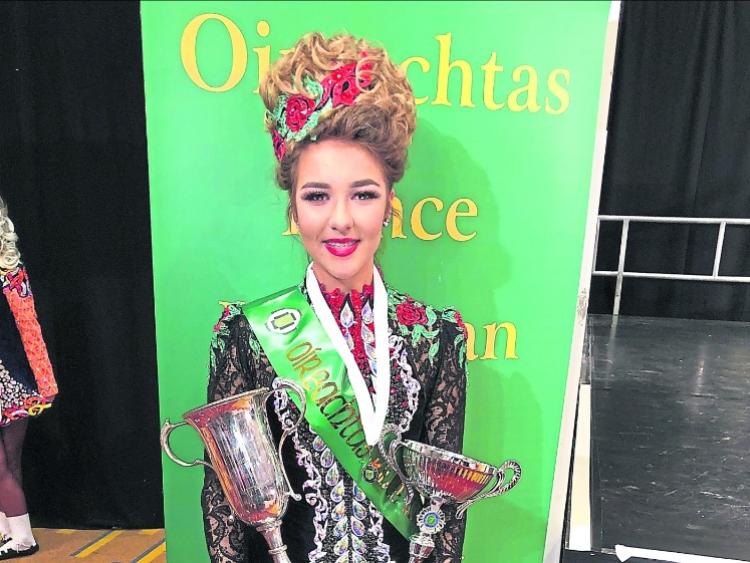 Ciara Rose McKeon (pictured) and her sister Ella are set to line up at the World Irish Dancing Championships in USA next year after securing their qualification last weekend.

Drumlish dancing sisters, Ciara Rose and Ella McKeon, are celebrating this week after they both qualified to compete at the World Irish Dancing Championships in April 2019 at Greensboro, North Carolina, USA.

Daughters of Laura and Gerry McKeon, both girls performed extremely well at the An Coimisiun Irish Dancing Leinster Championships last weekend at the Pillo Hotel, Ashbourne.

Ciara Rose, a fifth year student at Moyne Community School, was crowned U-16 Leinster Champion after she was placed first at the event.

Her mum Laura explained, “This is the 4th time Ciara Rose won Leinster titles and has brought a cup back to Drumlish. She also won provincial titles in 2014, 2015 and 2016.”

Ella, a 6th class student at St Mary's National School, Drumlish, who hopes to attend Moyne next September, finished fourth in her age group at the Leinster Finals.

Laura remarked, “Ella has jumped up three places. She has put a huge amount of work into her dancing to claim a podium place this year.”

Both Ciara Rose and Ella have danced with the prestigious O’Neill Geraghty School of Dancing since the age of five. Laura expressed thanks to their ‘amazing and dedicated dance teachers’ Tracey O’Neill Blake, TCRG, Brian Geraghty, ADCRG and Tara Blake.