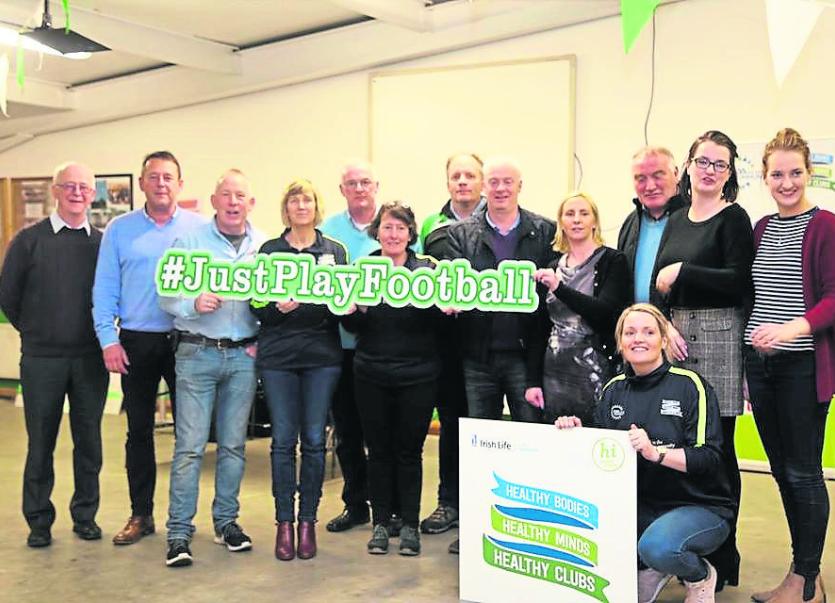 James received his award from Footballer of the Year, Dublin’s Brian Fenton, at the Healthy Club National Conference in Croke Park.

One of 23 people recognised for their work in the community, James was chosen for his vision in progressing the Healthy Club Project locally and for his ongoing hands on support.

Brid McGoldrick, Longford GAA County Board vice chairperson and National Healthy Club Chairperson opened the National Conference which was attended by over 500 people.

The Killoe Healthy club team presented their #JustPlayFootball project to all the club delegates present.

The #JustPlayFootball project, which was officially unveiled locally on Tuesday, November 6 at the Emmet Og clubhouse, consists of three short videos.

The videos are entitled ; 1 #JustPlayFootball, 2 Children’s interviews and 3 Referees interviews, and they were shown to the audience at the launch.

Claire Campbell of the Killoe Healthy Club Team explained that the #JustPlayFootball video aims to illustrate the incredible health benefits that exist in the GAA. She added, “The GAA can become even more influential nationwide and be a driving force for mental fitness and respect through football.”
Another interesting aspect of the Killoe project is that they have introduced a ‘No Mobile Phone Policy’.

Claire remarked, “The club is implementing a no mobile phone policy. People are happy that the hour at football is going to be technology free. This will go further to promote positive mental health.”

The Healthy Club Project aims to broaden the traditional boundaries of a GAA club, turning clubs into hubs for health in the communities. It involves a partnership with Healthy Ireland, the National Office for Suicide Prevention, the HSE, and is proudly supported by Irish Life.

Clubs focus on a range of health topics, including healthy eating; mental fitness and emotional wellbeing; physical activity for non-playing members; gambling drug, and alcohol awareness (including becoming smoke-free clubs); engaging older members; and the provision of games for persons with special needs and those from minority groups, amongst other things.