Pathways to Power' all the way to Lanesboro 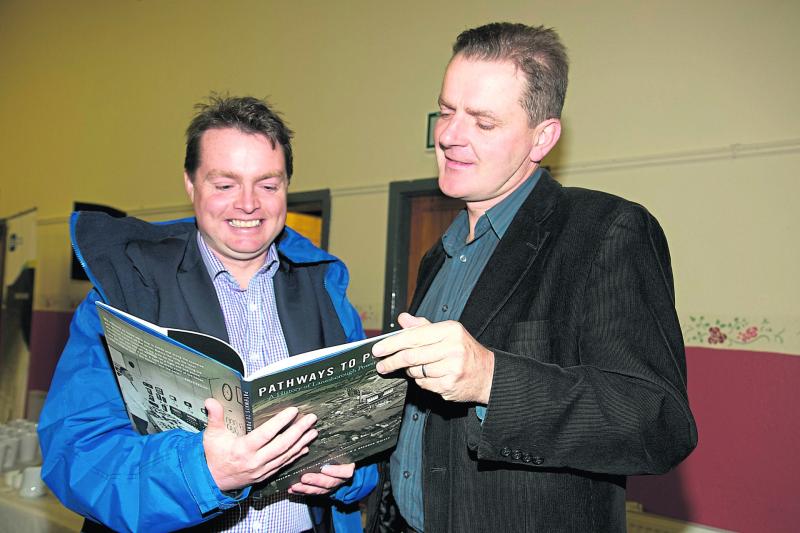 Paul Hand and Seán Murphy from the ESB enjoying proceedings at St Mary's Hall in Lanesboro on Monday.

A very special book launch took place at St Mary’s Hall in Lanesboro on Monday last and it was an occasion that centred on the local power plant and the place it held in the hearts of the south Longford community.

The book entitled, ‘Pathways to Power: A History of Lanesborough Power Station’ charts the proud and colourful history of the Lanesboro facility, one of the country’s most significant peat power plants, and was written by JJ Fallon, Patsy Fallon, John Loughlin and Brendan Whitty.

Within the covers, the authors recount the integral role of the station in the surrounding community since its inception in 1958, through to the decommissioning of the old station in 2004.

“This book records and celebrates the contribution of successive generations of staff through those years,” Patsy Fallon told a packed St Mary’s Hall this week.

“The station was designed to help to reduce Ireland’s dependence on imported fossil fuels in the wake of World War II and to provide employment and boost the local economy.

“At its peak in the 1980s and 1990s, Lanesboro had a generating capacity of 85 MW, and was considered to be the most cost effective and efficient peat fired electricity generating station in Ireland.

“Over its 46 year lifetime it employed about 500 people and used both sod and milled peat to generate electricity producing enough electricity to supply the power needs of 35,000 homes each year.”

“I really enjoyed my time in Lanesboro and I found the staff hugely enthusiastic and warm and ready to embrace any change that came their way,” she smiled.

“The can-do attitude meant that the station invariably ran efficiently as possible, minimising downtime so that the station was available when the demands on the national grid needed it most.

“We also had a huge focus on eliminating accidents and I believe we were very successful in all these endeavours.”

‘Pathways to Power: A History of Lanesborough Power Station’ is available locally and costs €25.
It is also availabe at ESB’s archives and they can be contacted on 01 6042146 or esbarchives@esb.ie.