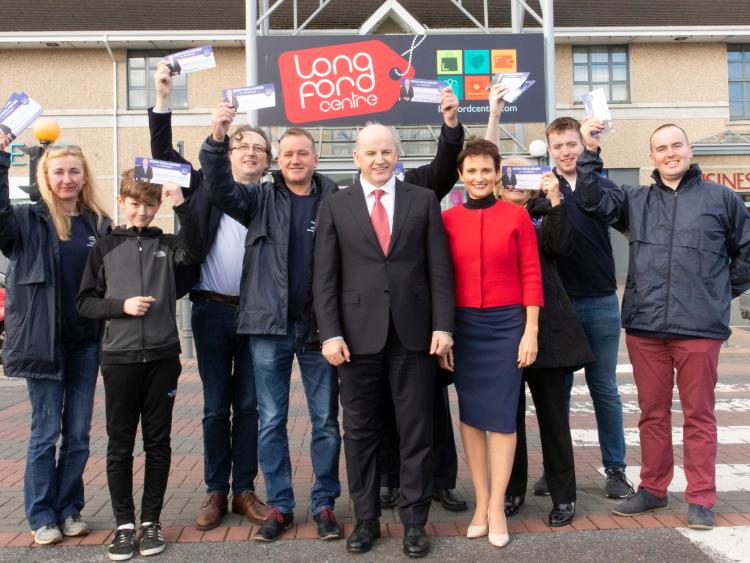 Seán and Trish Gallagher with their canvassing team in Longford. Picture: KInlan Photography.

He may be a considerable distance behind incumbent Michael D Higgins in the opinion polls, but former Dragons’ Den star Sean Gallagher is not giving up the Presidential fight just yet.

The Cavan businessman was on the canvass train in Longford on Sunday to take in the opening day of the county’s Aisling Children’s Arts Festival.

ALSO READ: POLL: Who are you voting for in the upcoming Presidential Election?

Mr Gallagher smiled and shook the hands of young attendees and their parents at St Michael’s Boys National School ahead of polling day on Friday.

And the father of two wasted little time in reaching out to voters in a bid to eat into Michael D Higgins’ seemingly insurmountable lead.

“I believe the choice voters will have on Friday is very simple,” stressed a relaxed but defiant Mr Gallagher.

“I come from Cavan and I know the issues facing counties like Longford. The question is do people want more of the same old, same old and same lofty speeches but nothing else.

“Or, do they want someone young, someone who is energetic and dynamic and someone who will breathe new life into the role?”

Mr Gallagher refuted suggestions concerning the limitations the Irish Head of State enjoys and the accountability the office of President faces from government chiefs inside Leinster House.

In a candid appeal to the local electorate, Mr Gallagher vowed to become a “working president” that would serve alongside State legislators in bringing about jobs growth and take a hands-on approach with the challenges facing Ireland post Brexit.

In reaffirming his appeal for a “time for change”, Mr Gallagher didn’t let his visit to the county pass without issuing a parting shot at the man presently holding the keys to the Áras.

“He is not debating and opening himself up to scrutiny,” said Mr Gallagher, in reference to President Higgins' selective approach to media debates over the past two weeks.

“This is a man who started out as a socialist and is now living the extravagance of office without much transparency.”

Innuendos concerning opulence and excess are inevitably linked to revelations over a €317,000 unaudited annual allowance to the Irish President and claims the former Labour TD also stayed in a €3,000 a night Geneva hotel using taxpayers’ money.

“It's just not good enough for the ordinary people of this country who are trying to survive,” he said.
Meanwhile, it has been announced that Saturday's count, together with the blasphemy referendum, will take place at Athlone's Institute of Technology (AIT).

Voting for both gets underway at polling stations across the county from 7am.