Longford Leader Columnist Mattie Fox: A brilliant advertisement for how football should be played 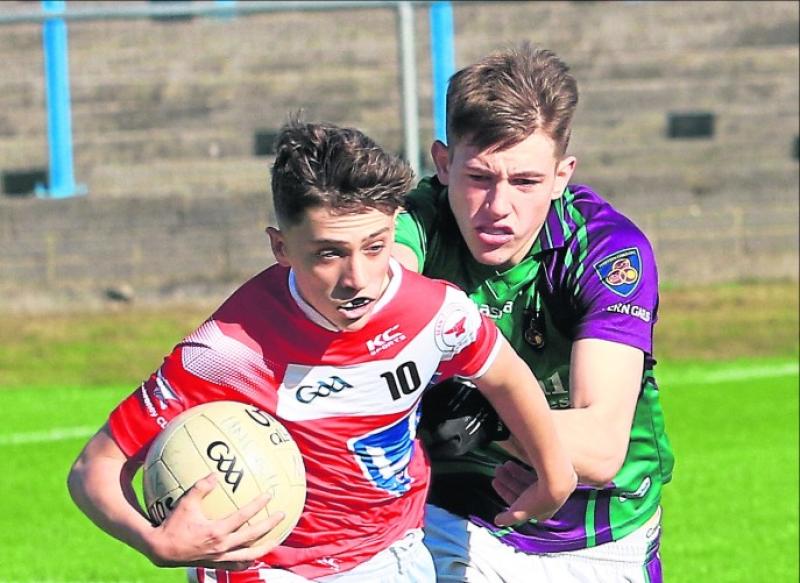 Ronan McGreal (Clonbroney/Wolfe Tones) being tackled by Richard Prior (Western Gaels) in the Under 16 Championship. Photo Syl Healy

On Saturday last we watched a brilliant display from two teams who both delivered magnificent spells of football.

Proving once and for all that Gaelic Football is still alive and well, as long as it’s protected from too much management interference.

As Gaelic Football is currently played, it’s essentially become a totally defensive game, with emphasis being placed on holding up the ball, by incessant, boring hand passing.

Saturday we were treated to two well prepared teams who played terrific expansive and exciting football, and never relented until they were simply dying on their feet.

Although Western Gaels started well and settled first into the game, it became obvious towards half time the Clonbroney/Wolfe Tones combination, were very much in the game, after a first half in which both teams squandered chances to tack on more scores.

In that half, full forward Tiernan Hussey finally cracked the defence after receiving a perfect pinpoint long ball pass from midfielder John Doris, when the two players combined for Hussey to crack the first goal of the game.
This was a score which had threatened a few times during that half.

Hussey, who is a very exciting prospect, looked dangerous throughout the game, but mostly received ball in crowded areas.
in the second half it was obvious someone spoke in dressing room because Hussey received long wide ball over and over. Inevitably he won everything coming in, and scored two more goals as a result.

The third being a real scorching classic.

There were some magnificent displays on both teams, Western Gaels midfielder Richard Prior looked powerful and commanding, although Sean O’Sullivan (Clonbroney/Wolfe Tones) was very imposing, and was hugely influential throughout.
He’s no weakling and seeing him crash through the defence on a few occasions reminded me of a great Kerry midfielder.
Western Gaels also had many great players, including Myshko Kajan, Seadna Ryan, and Harvey Myhill.

For the winners, John Doris impressed, and completed a tough, uncompromising midfield for the men in red and white.
There were many great displays throughout the Clonbroney/Wolfe Tones side, starting with the goalie Cillian Reynolds, who had a great game.

The fullback spot manned by Padraig Sheridan who proved strong throughout, with joint captain Shane Courtney, plus Adam Reilly, who made life difficult for Western Gaels, having got their measure pre half time.

The halfback line of John and Killian Rawle with Matthew Shaughnessy at centre back, put in outstanding displays - particularly Killian Rawle who marshalled his man with sureness of touch and remained composed.
Shaughnessy also, was superb.

Ronan McGreal, the other joint captain certainly played a captains part as his constant forays proved mostly to be unstoppable. Dylan Lynch and Cameron Cassidy completed the half forward line which was elusive for most of the second half.

Apart from Tiernan Hussey, one of the players I was really impressed with, was Brian Williams who was very quick to gain possession and even quicker to give a telling pass.

Another star in the making.

The full forward line was completed by Bobby Crilly who constantly sought to find an opening.
When the game finished, I couldn’t help think that these were the core of two potentially serious senior sides, when that time comes.

It was great reward to see Clonbroney/Wolfe Tones collect the cup on that great platform which defines success.
I’d expect them to visit that area of Pearse Park again, sooner rather than later.

May they have great success, and to everyone involved in the team, and it’s preparation, we can but take our hats off to their collective effort, which takes such huge time.