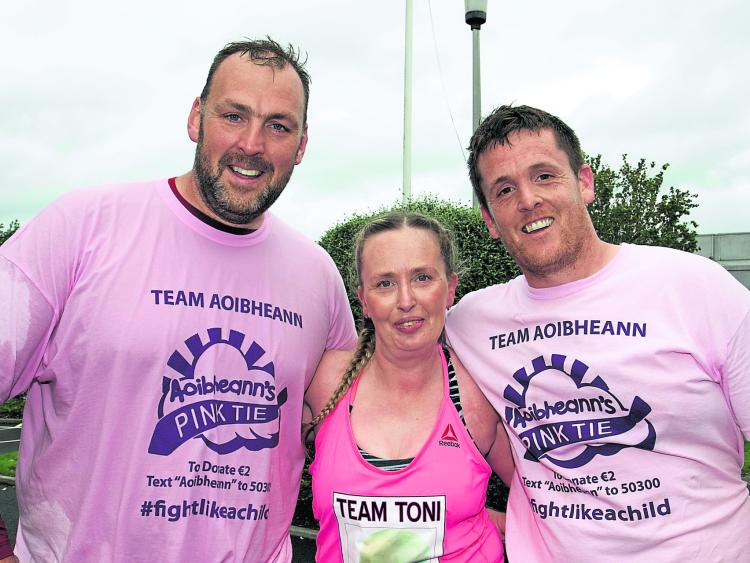 James Wise and Mark Duffy ran their marathon in Longford on Saturday in memory of Toni Louise Harte, who passed away last year after a battle with cancer.

It was surely an exhausting day for Kilkenny lads, James Wise and Mark Duffy who ran their fourth marathon in four days last Saturday in Longford town.

And they're not done yet: the ambitious duo took annual leave from work last week to set off around the country to run a total of 12 marathons in 12 days.

They're doing it all in aid of Aoibheann's Pink Tie and, following their Longford marathon, had already raised over €10,000 for the charity.

And the marathon on Saturday was particularly special for one Longford town family as it was run in memory of Templemichael College student, Toni Louise Harte, who passed away last year following a fight with cancer.

“As far as I know, they were never touched by anything; they just heard other people’s stories and decided to do this in aid of the charity. But they said they’ve learned so much from the stories they’ve heard along the way,” said Shannen Harte-Quinn, who is Toni Louise's sister.

This month is Child Cancer Awareness Month and Shannen was thrilled with the huge turnout and support that was shown on Saturday morning.

“It was very good. We couldn’t have asked for a better turnout,” she told the Leader on Monday.

“The lads did it in the time they said they would. There were a few showers but they nearly preferred that to cool them down,” she laughed.

“Members of Brendan Doyle’s running club joined them to do a few loops of the canal with them and other people sort of jumped in and out, so they were never running it on their own.

“One of the lads was injured and he had to suck it up and keep going, which he did.”

The two lads completed their run in just over five hours, but weren't trying to push themselves to do it in less - especially since they had another eight days of marathons to go.

On their Facebook page, the duo said that they were thrilled with the support they received on Saturday.

“We are unbelievably grateful for your amazing support to our challenge.”