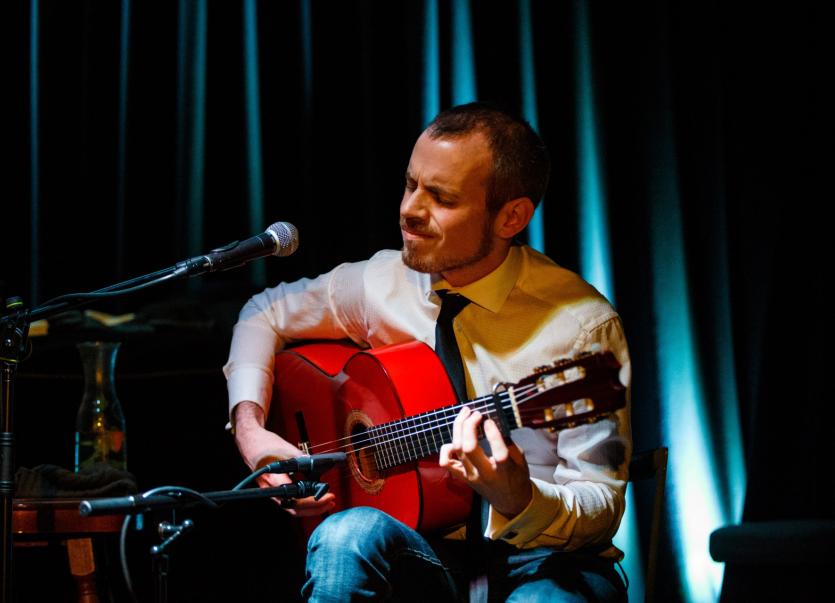 The Backstage Theatre will provide Longford with something completely different this Saturday night and Sunday afternoon as Ballinamuck native John Walsh prepares to bring the passionate art of Flamenco music to the county.

John is Ireland's leading flamenco guitarist and is aiming to bring all the excitement, energy and emotional depth of authentic Flamenco straight from Spain to Longford.

It will be a performance of traditional Flamenco palos (song forms) as well as some of his own instrumental compositions for guitar.

On the night, John will perform alongside traditional Flamenco singer, Maria Delgado; top percussionist from Toleda, Gines Pozas; and Remedios Heredia, a dancer from a gypsy family of Madridwhose members include legendary musicians such as the guitarist Sabicas and the great singer Estrella Morente.

Ballinamuck is a part of Longford well known for its love of country music but it was Spanish music that caught the ear of John when he was working in Dublin.

“I bought a lot of CDs - I was into guitar music,” John told the Longford Leader.

“I became obsessed with Flamenco and gave up my day job and went to Speain to learn it.

“I did a classical guitar diploma before going, but Flamenco is a completely different style - it can't really be classified as western music.”

John started playing the guitar around ten years ago, during his Leaving Cert year and he's had a very colourful and successful career to date.

“There have been a number of highlights. I played at a lot of festivals when I was starting out,” he explained.

In 2014, John was involved in writing and performing for Ballet Ireland’s production of 'Carmen'. He also performed in The National Concert Hall and at prestigious Flamenco festivals and venues in Spain.

And, he said, there's been a lot of interest in this kind of music here in Ireland.

“I've played a lot of concerts and festivals in Spain to an audience that's very familiar with the music, which was a bit nerve-wracking,” he laughed.

But people in Longford have been reacting positively to this very different style of performance so far - probably because it's the type of music they would hear on holiday in Spain.

“The majority of Saturday night's show will be purely guitar-centred,” said John.

“And it will be 90 percent my own composition.

“But the singing is important and I wanted to bring a fuller version of what Flamenco is for more authenticity. So there will be some focus around the singing.”

And, he added, the show will travel through the different Flamenco forms.

It's a bit like trad music being separated into reels and jobs. Flamenco is also separated into different forms,” he said.
“It's very up-tempo, exciting, passionate music.”

Tickets for Saturday night's show are currently available from the Backstage Theatre website.

Sunday afternoon will provide local music enthusiasts with the opportunity to learn a bit more about this exciting style of music.

John will host a workshop, free of charge, in the Backstage Theatre at 12.30pm, which will be open to the public.

“I'll be running this workshop for a general audience, but guitarists are very welcome. We'll go through the use of the right hand for people who want to use their right hand for picking, etc.,” said John.

“We'll also talk through some of the rhythms and different aspects of Flamenco.

“You don't need to be a musician to come along.”

Tickets for the gig on Saturday night can be booked via the Backstage Theatre, but a lot of tickets are already gone, so book fast.

“There's an appetite for thing kind of thing in Longford,” said John.

“It's so different but generally I think people in Ireland - and Longford is no exception - are interested in something different.”