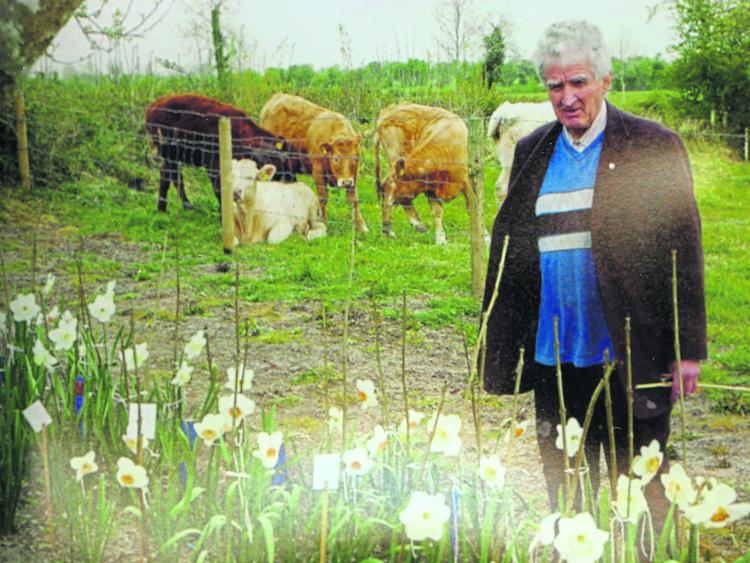 Patrick Kiernan was a highly respected member of the community in which he lived for over 90 years.

One daffodil is worth a thousand pleasures, then one is too few”, William Wordsworth once said and if this is the case then the late Patrick Kiernan from Edgeworthstown was surrounded by a treasure chest of life’s pleasures.

And there was a deep sense of sadness back in July of this year when Patrick (Paddy) Kiernan, Cam, Edgeworthstown, Co Longford passed away peacefully in his 93rd year surrounded by his family, in the loving care of the staff of St Therese's Ward, St Joseph's Care Centre, Longford.

Partick was a highly respected member of the community in which he lived and was regarded as a farmer, daffodil breeder, market gardener and friend; his passing has left a huge void within his family, community and in the world of horticulture.

The Co Longford man retired from farming in 1984 and began searching around for a hobby to occupy his time, and because he had a special interest in daffodils he decided to concentrate on growing them.

In the past, the well-known Edgeworthstown man had used part of his land to grow vegetables and in the days before multiple supermarkets and centralised suppliers, he supplied York cabbage to most of the grocery shops in Longford.

His market gardening awakened his interest in plants in general and he was helped by the local horticultural adviser who gave him books and encouraged him to try something new.

It was in one of these publications that Patrick read an article about daffodils (botanical name Narcissus) and he was immediately hooked.

He sent to England for special types of bulbs but they were stopped at customs and returned.

Later, a friend brought them over!

He joined the Northern Ireland Growers and in a few years he had 60 different varieties of bulb purchased at two to find pounds each.

He also got bulbes from John O’Reilly and Brian Duncan - the doyen of daffodil breeders - but he needed more of a challenge and so learned to hybridise following hints from gardening books and from the newsletter of the Northern Ireland Daffodil Group.

So successful was he, four of Patrick Kiernan’s daffodils have been registered with the International Daffodil Registrar - the official body controlled by the Royal Horticulture Society in England.

Narcissus ‘Lough Gowna’ was named after the lake that bordered his childhood home and the flower itself is a large, vigorous daffodil with perfectly proportioned, deep yellow petals and trumpet.

Patrick Kiernan also loved fishing and spent much of his time in quiet contemplation along the River Inny.

He was regarded as a man with a good eye, patient and in possession of the determination needed to get good results.

This certainly came to pass with his daffodils.

In paying tribute to the late Patrick Kiernan, Mr Duncan said the Edgeworthstown native’s involvement in daffodil breeding had been “amazing”.

“It all started through his reading of an article about Richardson’s daffodil breeding activities in Waterford,” Mr Duncan added, before pointing out that Patrick’s surroundings - that of a neat whitewashed cottage in Co Longford - was the perfect setting for breeding and growing the flowers.

“Patrick had no contact with other daffodil growers; no advice or tutoring and yet he raised many thousands of seedling daffodils on his own initiative.

“On visits we had the honour of helping him to select good ones and growing them on for him.”

Meanwhile, Mr Duncan went on to say that to date four clones have been named including Cam Lake, Glen Lake, Inny River and Lough Gowna.

“Names,” he added, “that also reflect Patrick’s interest in fishing”.

He continued, “This shy, charming and modest man has left a nice little legacy for daffodil enthusiasts to enjoy in the future and like many I am sad at his passing, but feel privileged to have known him as a friend, and to have enjoyed the hospitality of his family when we visited Cam Lane.”

Predeceased by his sisters Anne, Mary and Bridget, his nephews Seamus and Patsy Kiernan, Patrick was laid to rest at Aughafin Cemetery following Funeral Mass in St Mary’s Church, Edgeworthstown on July 30, 2018.