Paddy and Gertie Egan celebrate 50 years of marriage in Kenagh 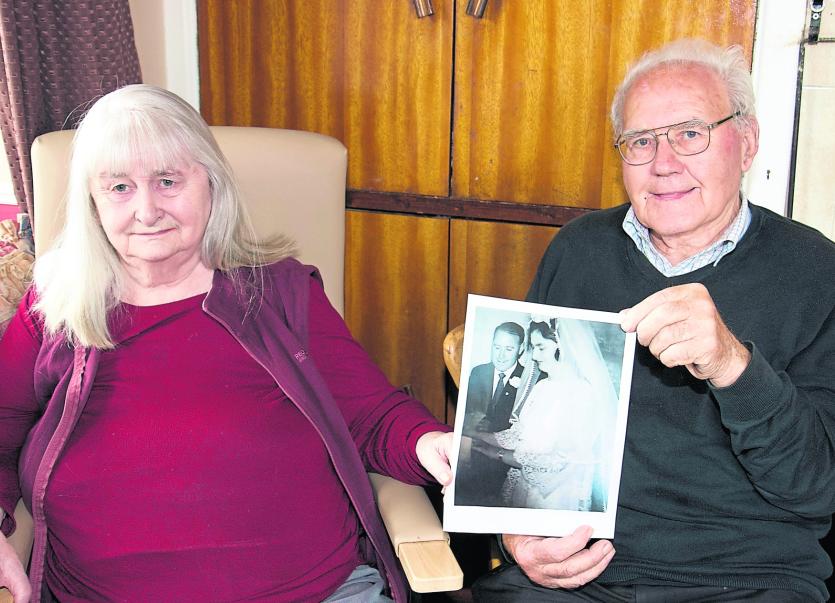 Fifty years ago this week, Kenagh couple Paddy (82) and Gertie (79) Egan got married in St Dominic’s Church in the village

Fifty years ago this week, Kenagh couple Paddy (82) and Gertie (79) Egan got married in St Dominic’s Church in the village.

The Leader sat down with the couple in their kitchen on Friday and, after a heartwarming chat, was left with no doubt that it has been a married life well lived.

Together the couple have six daughters - Grainne, Winnifred, Breege, Anne, Norah and Patricia - and nine grandchildren.

Dairy farmers all their lives, Paddy and Gertie milked their own cows, grew vegetables, had their own eggs and made their own butter.

Paddy also worked in a bottled milk plant in Dublin for four years from the age of 17-21 and before he got married. He got home for one week every July and it was Christmas with his family that he missed the most.

But that was then and this is now and looking back on 50 years ago this week, the Kenagh couple recalled some wonderful memories.

They first met at Durkin’s store in Longford town; Paddy knew Gertie’s sister Josie and one Saturday night he went into Longford town on his motorbike to buy a pair of trousers and Gertie and Josie were standing outside the shop.

Paddy and Gertie got chatting and the rest, as they say, is history!

“We met then at a crossroads dance in Killoe shortly after that - that time there were crossroads dances in Killashee, Killoe, Barry - all over the county,” smiles Paddy, before pointing to the fact that both he and Gertie came from farming backgrounds and it was therefore only natural that it would became a huge part of their own lives.

They courted for a couple of years and then tied the knot in September 1968 when they were married by their cousins Fr McGoey and Fr Hanlon.
The reception was held in Crover House, Cavan.

“In 1968 when we got married, the idea of going to a hotel to celebrate the occasion was just beginning to catch on,” Paddy added.

“Up to then, the weddings were still held in the bride’s house; our wedding was at 11am but there was a rule that weddings had to be held between 9am and 11am because people would be going to Holy Communion and they would have been fasting from midnight and have eaten nothing from the night before, so it was important that the wedding was held as early as possible.

“It was when that rule was done away with that weddings were moved on to one or two o’clock.”

Meanwhile, Gertie recalled an incident with the car as the couple travelled to their wedding reception in Crover House.

“The car myself and Paddy were travelling in - which was being driven by Michael - broke down halfway between Kenagh and Crover House,” she said.

“We had to wait then for some of our guests to come along and give us a lift to the reception!”

Ber, Gertie’s sister was her bridesmaid, while Michael Egan in Kenagh was Paddy’s best man.

The couple toured the south of Ireland in a caravan for their honeymoon and both remember it with very fond memories.

“We visited the Cliffs of Moher and the Gap of Dunloe - all the famous landmarks at the time,” continues Paddy.
“Honeymoons weren’t common back then either - the 60s brought certain changes.”
As time went on, the Egans settled into married life and were focused on rearing their children and farming the land.

However, machinery was improving and society was changing and, four years after the couple were married - in 1972 - Ireland entered the Common Market and farming methods began to change utterly.

“We had to stop selling the bottled milk for starters - that was no longer allowed,” recalls Paddy.

“Farmers were no longer allowed to sell raw milk; we milked cows and we were sending milk to the creamery then.”

Meanwhile Gertie baked, cooked and made butter. The Egans also grew their own vegetables and fattened their own turkeys.

“Back then families lived well milking eight or 10 cows - these days it takes 80 cows to have the same results,” Paddy adds.

“We used to fatten our own turkeys; we’d kill them here in the shed Christmas week and hand deliver them to our customers.”

This week too, the Egans’ neighbours the Fallons and the McDermotts also celebrate their 50th wedding anniversaries and the three families have remained close over the intervening years.

“We all had common interests and we have had great friendships over the last 50 years,” added Paddy before pointing out that both he and Gertie have a deep faith and have held onto that throughout their lives.

Regular mass goers, they have both remained pioneers and have contributed enormously to the community in which they live.

But does society’s changing attitude to religion bother them?
“I don’t pass any remarks on that to be honest,” says Paddy.

“You have to be able to think for yourself and get on with it.”

He does however admit that religious beliefs were drummed into him when he was a youngster.

“I remember we had an old banger of car, in fact my mother was alive at the time and myself and my siblings would have been teenagers then,” he recalls.

“One Sunday morning the car wouldn’t start for mass and we didn’t get to mass that day.

“We got the car going later in the day anyway.

“Sunday night was the night for dancing and we all got ourselves ready as we usually did to head off and my mother put the boot down and said, ‘ye are not going dancing, ye never went to mass this morning’.

“That was then end of that I can tell you - none of us went dancing that night!”

Both Gertie and Paddy say that the birth of their six daughters brought them untold joy in their marriage.

Paddy also says that the couple went on a holiday to celebrate their 25th wedding anniversary and they enjoyed it so much because neither of them had taken a break for a long time prior to that.

“We had some wonderful Christmases over the years,” smiled Gertie, who visited all her neighbours on Christmas morning without fail.

Meanwhile, with regards to the journey to the 50th anniversary of their marriage and how a couple can achieve something so wonderful, Paddy says it’s down to similar interests and an appreciation for all that was good around them.

Gertie was a member of ICA, Macra na Feirme and founding member of Longford Women’s Link while Paddy was involved in the GAA, IFA and Longford Ploughing Association.

“It’s important to have lots of interest and be involved,” says Paddy.

“It’s important to be able to have chats with people and talk to people, and be around like-minded people.

“An idle mind is the devil’s workshop!”

Both Paddy and Gertie say too that it’s important not to let arguments drag on - “deal with them,” added Gertie.

Paddy - who is regarded as a local historian also loves to write poetry and as he says himself, “as long as I have a bag of sweets and a bit of paper, I’m happy!”