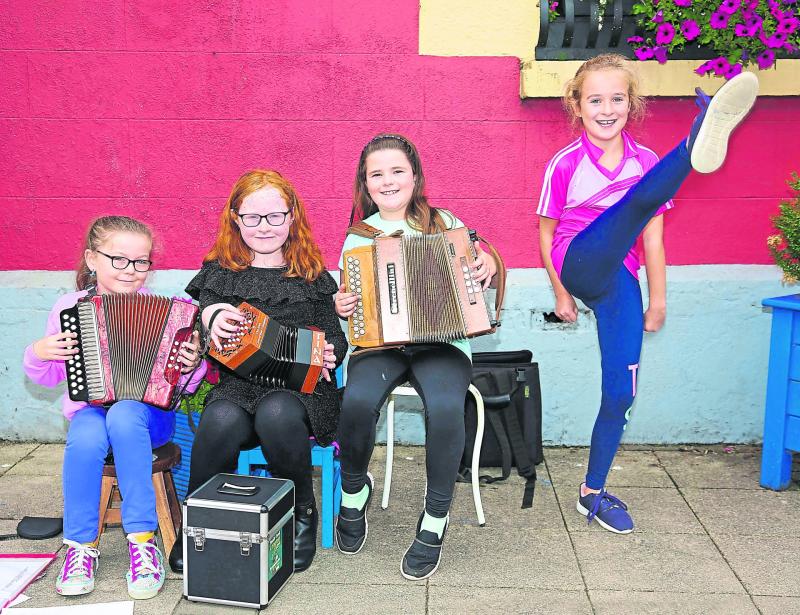 The town of Granard came alive to the sounds of traditional music, song and dance last weekend as the Harp Festival got underway after an absence of a number of years.

Trustee of the Granard Harp Festival Jimmy Donoghue told those gathered at the event’s launch in the Market House that it was an historic day for the north Longford town.

“The fact that Granard was the first town to ever hold a Harp Festival is something of pride and joy and the revival of this wonderful event gives us an opportunity to remember all those who have been involved,” he said.

“The reason it was held in Granard is because of John Dungan who was born in 1730.

“He travelled to Denmark around 1755 and married Mary O’Connell who came from a family of poets and musicians.

“Granard has its own special place in the annals of our native music and this was commemorated by the Harp Festival of 1781.”

Creative Ireland Longford Coordinator, Mary Carleton Reynolds, meanwhile added, “Granard is the home of the harp, and traditional music was never stronger in this county than it is now.”

She then paid tribute to the three Co Longford branches of Comhaltas Cheoltoirí Eireann whom she said had been “front and centre” in the organising of this year’s Harp Festival.

Cathaoirleach, Longford Co Council, Cllr Luie McEntire then pointed to the significance of the harp, the musical instrument synonymous with the town of Granard.

“The harp has a unique connection with Granard; in 1781 the first Harp Festival in Ireland was held in the Market House here in Granard and harpers came from all over Ireland to take part,” he added, before recalling the late Cannon Gilfillan's contribution to the event.

“200 years later in 1981 the Festival was revived and it continued for a number of years under the guidance of Cannon Gilfillan, and indeed all those who were involved over the years have made a very valuable contribution to this community.”

Meanwhile, it was a jam packed weekend for festival goers and participants alike with concerts, workshops and a busking competition to contend with.

“Many of the performers are local artists and musicians and we can all be very proud of the wealth of talent that is not only here in Granard but across the entire county of Longford,” added Cllr McEntire.

“Granard has always been a great meeting spot for the people of this county and it is a town that has will continue to provide all of us with a lifetime of memories.”