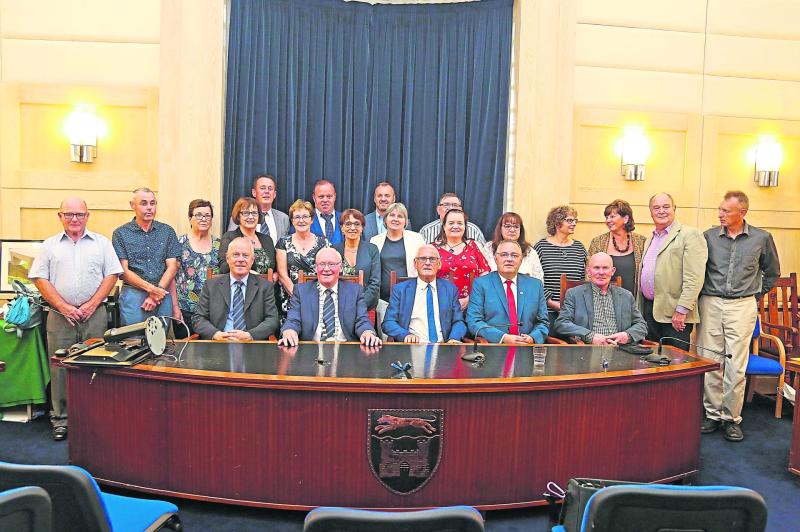 The 21st anniversary marking Ballinamuck's twinning agreement between it and the French town of Essert has been hailed a magnificent success.

The historic milestone was celebrated over ten immensely enjoyable days and which incorporated involvement in the Cruthú Urban Forest project and a camping trip on the River Shannon at Rooskey, courtesy of Shannon River Adventures.

While that particular excursion was left to the younger generation, for the adults a Victorian Escapades in Mullingar alongside a trip to Tullamore Dew and Abbesyhrule.

For most though, the trip's highlight was a civic reception at Longford County Council headquarters a little under two weeks ago.

The group was welcomed into the council chamber by Cathaoirleach Cllr Luie McEntire, himself a veteran of two exchange visits to Essert.

In a fitting gesture the long serving local politician reminisced of his fond memories of the welcome and hospitality he received there.

It is manufactured in a polished, light coloured, sandstone - as traditionally found in the Ballinamuck area of north Longford.

Mayor of Essert Yves Gaume expressed his appreciation for the unique gift as further evidence of the close ties that now prevailed between both locations.

He stressed the importance of these friendships in an increasingly uncertain world, before pointing out how a street in Essert had been named after its Irish twinning partner.

In his address, Longford County Council Chief Executive Paddy Mahon told of the priority that the Council had given to the promotion of Longford as a tourism destination.

The development of a Rebel Trail in north Longford which includes Ballinamuck and its association with the 1798 rebellion came in for specific mention.

Indeed, it was the infamous Battle of Ballinamuck in 1798 and the indelible imprint it cast on the local social fabric which provided the springboard for the twinning between Ballinamuck and Essert de Belfort.

Regardless of its legacy, the battle brought a large number of welcome, if unexpected, visitors from France to County Longford.

Paddy Howe, Chairperson of Ballinamuck Enterprise said the ensuing twinning accord is testament to the goodwill and friendships that have, and continue to prevail more than two centuries later.