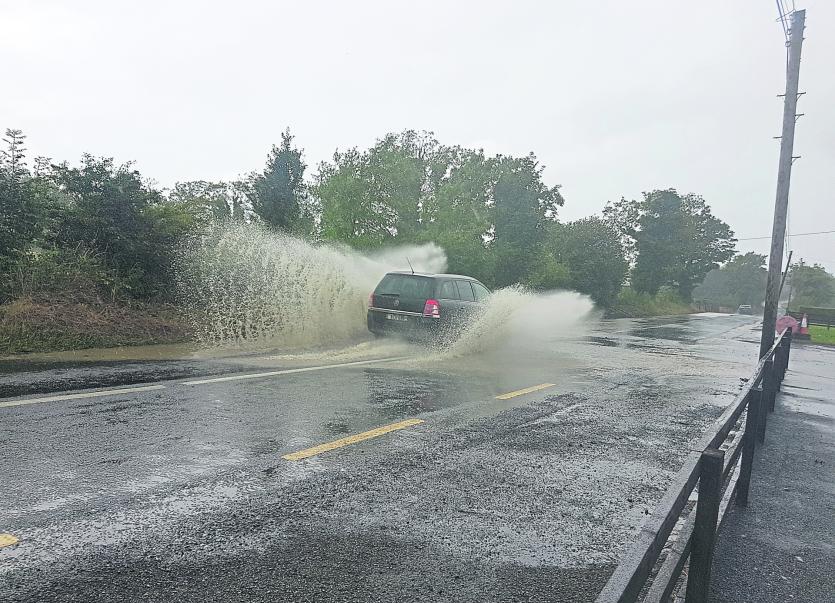 A motorist struggles to navigate their way past the burst water mains on a flooded Longford to Drumlish road last week.

Irish Water has come in for fresh criticism this week after a pipe located along one of Co Longford's busiest roads burst for the seventh time since the start of 2014.

One of those, Damien Masterson, told of the frustration he encountered after initially attempting to report the problem with Irish Water only to be told a short time later by Longford County Council that no record had been passed on from the utility to local roads officials.

After being told that no correspondence had been passed on, Damien contacted Irish Water for a second time as water continued to pour from the burst pipe onto the road and within touching distance of the local teacher's front door.

"I said 'What do you mean you can't send anyone out? This road is dangerous' and I said I would ring them (Irish Water) again.

"I said I logged the call and that it hasn't been sent through to the Council. He said: 'We don't log calls until evening'. I said 'Stop, you can't have a safety issue on a road and leave it until you are finished work to send on messages to the local council'."

The latest saga to hit Longford's creaking water network comes hot on the heels of last week's revelation by the Leader, which found more than €9m of taxpayers money has been spent on repairing water leaks, breakdowns and upgrade works across the county over the past two and a half years.

Damien was keen to credit the "very professional" manner which had been adopted by the Council when news of the pipe burst was made known.

His concern rather was how issues of this type are dealt with both now and into the future.

"It's the hassle," he said, when asked about the latest and most recent episode.

"I have a seven year old child as well and when this happened, you have monsoons of water pouring in your drive.

"I am trying to go outside to see what I can do and I am coming out here seeing who you can ring. At the same time you are worried about the child inside.

"The problem I see there is no connection and when I am looking at this, who is the person that takes charge and says right we have an issue at Cahanagh?"