Longford's Aidan O'Hara to have 'A Grand Time' in Newfoundland 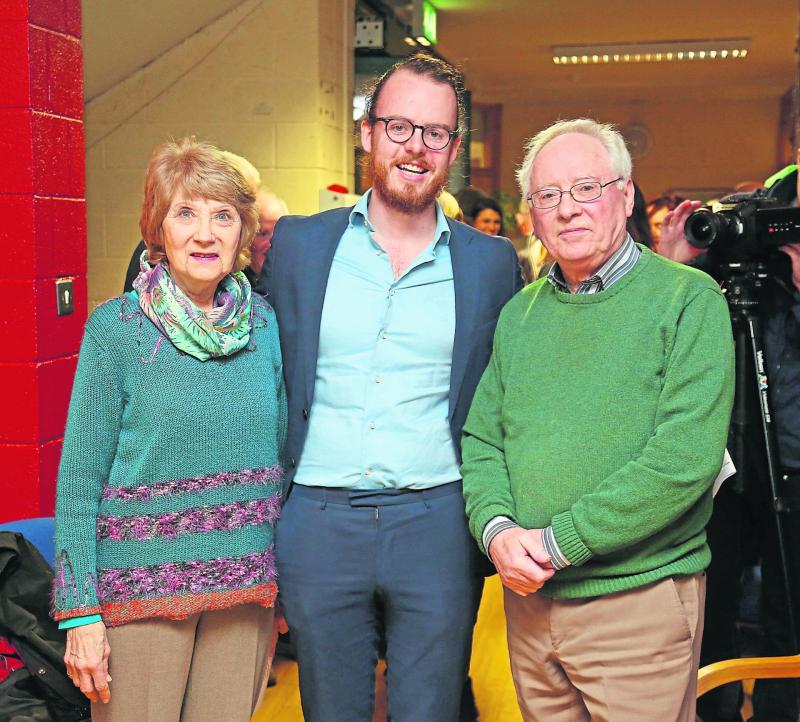 Joyce and Aidan O'Hara at the launch of Killo author John Connell's 'The Cow Book' in March of this year.

A new exhibition - 'A Grand Time' - which celebrates Newfoundland’s unique song, music, and dance traditions, while observing strong connections to Ireland, will open in August as a tribute to Longford resident Aidan O'Hara.

Aidan was recently chosen as the winner of the 2018 Newfoundland and Labrador Folk Arts Society Lifetime Achievement Award in recognition of his remarkable work in documenting, preserving, and promoting Newfoundland-Irish cultural traditions.

And with the support of Culture Ireland, and local partners in Newfoundland, Aidan and his wife, Joyce, will join ITMA Director Grace Toland, ITMA Project lead Rebecca Draisey-Collishaw, and ITMA Field Recording Officer Brian Doyle for the unveiling of the project at a series of events scheduled for August 1 to 4 next in the Canadian province.

In 1993, Aidan donated a collection of more than 130 audio reel-to-reels and tape cassettes to the Irish Traditional Music Archive, the majority of which he recorded between 1974 and 1978 while resident in Newfoundland.

Scheduled to launch on 1 August 2018, ‘A Grand Time’ makes available for the first time more than 60 historical sound recordings of songs, stories, and music from this collection. Best of all, it's freely available to users. Read more about 'A Grand Time' HERE

Aidan is well known locally and he has many friends and relations in north Longford and south Leitrim, and he is also an active member of Co Longford Historical Society.

County Donegal-born award-winning writer and broadcaster, Aidan O’Hara, has worked as a presenter and producer with RTÉ (Ireland’s National Broadcaster) and the CBC.

In the autumn of 1973 he decided to become a student again and with his wife, Joyce, and their four children arrived in Newfoundland where he signed up for two years of study at Memorial University of Newfoundland (MUN).

While studying folklore and cultural geography at MUN, Aidan worked in radio and television with CBC St John’s and quickly became immersed in life in the provincial capital.

Aidan was fortunate to have as his mentor and friend, Galwayman, Dr John Mannion, Professor of cultural geography at MUN, and he introduced him to the Irish communities on the Cape Shore of Placentia Bay, Point Lance and Branch in St Mary’s Bay.

The O’Haras formed firm friendships the people in those communities and over the next five years Aidan recorded many of their songs and stories.

Some of these recordings will be featured on the Irish Traditional Music Archive web site following a launch in Branch at the end of July.

Throughout the seventies, Aidan featured ‘The Branch Crowd’ as they became known in his broadcasts, on stage, and in print in St John’s.

Their first big exposure to a wider audience was when they appeared at the first two Folk Arts Council Festivals in 1977 and ’78.

Aidan was Vice-President of the St John’s Folk Arts Council at the time and he was co-founder of the festival and programme director for the first two years.

Through his radio broadcasts on RTÉ radio programmes and film documentaries on the Irish in Newfoundland – especially his prizewinning The Forgotten Irish – people in Ireland became aware of the strength of cultural ties between the two islands.

In 1976, the Irish embassy in Ottawa contacted Aidan to say that the Irish government representative at Montréal Olympics was coming to Newfoundland on holiday and would he look after him?

With four children, there was no room at Aidan and Joyce’s house, so they got John Mannion and his wife, Maura, to provide the visitor with accommodation.

Next day, the O’Haras brought him to Branch where their friends, Mary and Anthony Power, looked after him.

John was quickly impressed with the strength of their Irish ways in song and story, and later said, “It was quite an amazing sense of coming home, even though I had never been there before.”

As a result of that visit, and from what he learned from Professor Mannion about the extent of Irish-Newfoundland ties, when Mr Bruton was Irish Prime Minister, he signed a memorandum of understanding with Premier Brian Tobin in 1996.

It resulted in establishing cultural, educational, and business ties between the two islands that continue to this day.

In 1998, Aidan’s book on the Irish of Newfoundland, Na Gaeil i dTalamh an Éisc, won the national Oireachtas Prize and the following year it was nominated for the Irish Times Literature Prize.

Aidan has done his bit to help in spreading the word about Newfoundland and for more than thirty years has spoken on its history and culture to groups and communities all over Ireland.

Over the forty years since their return to Ireland - they now live in Longford town - the home of Joyce and Aidan O’Hara has been ‘home from home’ for many Newfoundlanders from all walks of life.

Their door is always open to their friends and visitors from The Rock.