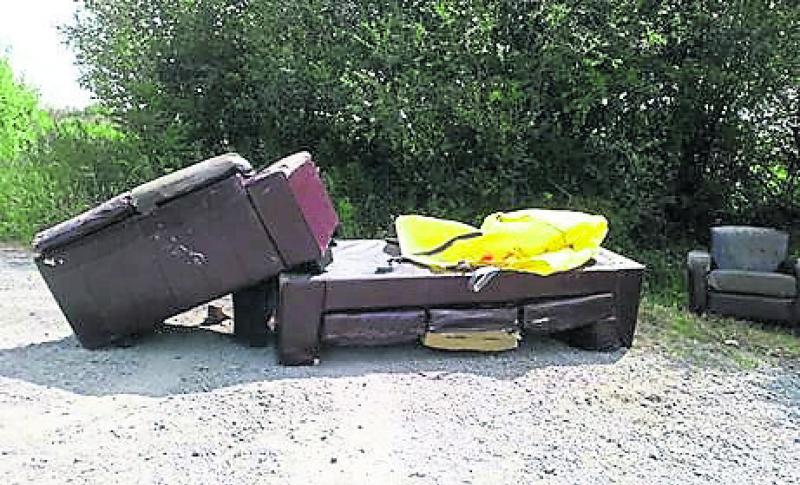 A full leather suite lies strewn across an open section of ground in Ferefad. The image was sent in by an angry member of the public who came across the unsightly find last Friday.

A local judge has raised concerns at what he believes is a gradual rise in levels of “indiscriminate dumping” in Longford town.

Judge Seamus Hughes reacted to the latest wave of domestic refuse to be found on the streets of Longford during last week's weekly district court sitting.

His ire was directed chiefly at the growing propensity for illegal fly-tippers to target a laneway close to Longford Courthouse, the latest episode of which was witnessed by the judge during a special court sitting last Monday.

“Every time I come to court there is a new accumulation of rubbish,” he said.

“Is there CCTV there?” Judge Hughes asked, leading Mr Warnock to reply: “I would imagine there is.” The former Fianna Fáíl TD was clearly not satisfied, causing him to take a thinly veiled swipe at the local authority's handling of the affair.

“Why haven't Longford County Council not got CCTV in the number one blackspot in the town?

“Every single week there are extra bags of rubbish,” he said.

Judge Hughes didn't stop there either, opting also to extend his empathy to the civic-minded residents of Annaly Park who face the growing scourge of wanton dumping on an almost daily basis.

He said locals could be forgiven for venting their own frustrations at the apparent lack of culpability there was over the controversy.

“Don't forget the Annaly Residents Association take great pride in their estate and it must jar people that no one has been held accountable,” he continued.

Over 20 illegal dumping cases reported each week in Longford

The judge's remarks were laid bare after pictures of the latest deluge to be dumped at the rear of Longford Courthouse were carried in last week's Longford Leader.

The judge, unlike most Mondays, was in town to preside over a special court sitting and came across the incident himself.

“There was the clear remnants of a couch, empty bottles and a carpet.

“Whoever is responsible is an absolute vandal,” he stormed.

It was at that juncture that a staff member from Longford County Council stepped forward to confirm the incident was being investigated.

Judge Hughes welcomed those comments but warned of how the town's image might be compromised should the extent of illegal dumping episodes countinue in the present vein.

“We all want to see Longford do well but there is a danger (of a rise in) indiscriminate dumping of domestic refuse in this town,” he said.

Judge Hughes rounded those inferences off by once more hitting out at the perpetrators behind the latest occurrence of illegal dumping to hit Longford town, branding it “total vandalism of the highest order.”