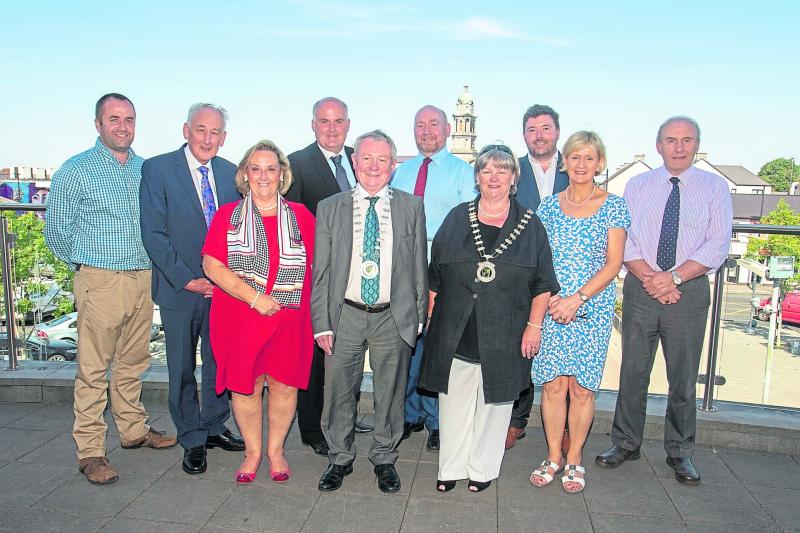 He’s well known for his acute political nous and successful business acumen, but now it would seem incoming Longford Municipal District Cathaoirleach Cllr Seamus Butler is being tagged with the task of rekindling the county town's socio-economic fortunes.

The former said it was a considerable honour to recommend his party’s group leader at local authority level, citing Cllr Butler’s role in the restoration of St Mel’s Cathedral as well as the “couple of pet projects” he had for the year ahead.

Cllr Warnock underlined those remarks, stating he had no doubt Cllr Butler would serve as an “excellent captain” ahead of the current council’s dissolution next year.

There were compliments too for outgoing Cathaoirleach Cllr Mae Sexton, a portion of which included noteworthy remarks from Director of Services John McKeon.

“Mae is one of the most committed, tenacious and hardest working representatives in Longford,” he said, while noting the near 500 jobs which had been created during her 12 month tenure.

The local authority chief was equally wholesome in his praise for her successor as he stated how, after several years of austerity, towns like Longford were now starting to re-emerge from the economic doldrums.

“From the 2016-2018, a lot of projects were put together and it is now that we are coming into an era where they have to be delivered,” he said.

In turning to what his new colleague at the council’s top table would likely offer over the next year, Mr McKeon said there was much for those inside and outside the chamber to be enthused about.

“He led the Council’s N4 delegation to the Department (of Transport), is commercially focused, pragmatic and a leader who sees the bigger picture.”

For his part, the man at the centre of the adulation highlighted a number of projects he was keen to bring to fruition.

Among them included the revitalisation of the Market Square, upgrades to footpaths and further advancements with both Connolly Barracks and a new innovation and digital hub.

They were commendations too from Cllr Peggy Nolan as she attested to the starring role her long time council colleague had played in Longford’s recent 20th anniversary twinning celebrations in Noyal-Châtillon-sur-Seiche.

True to form and having displayed his gallic speaking credentials on more than one occasion in the past, Cllr Butler replied, “Merci Beacoup.”