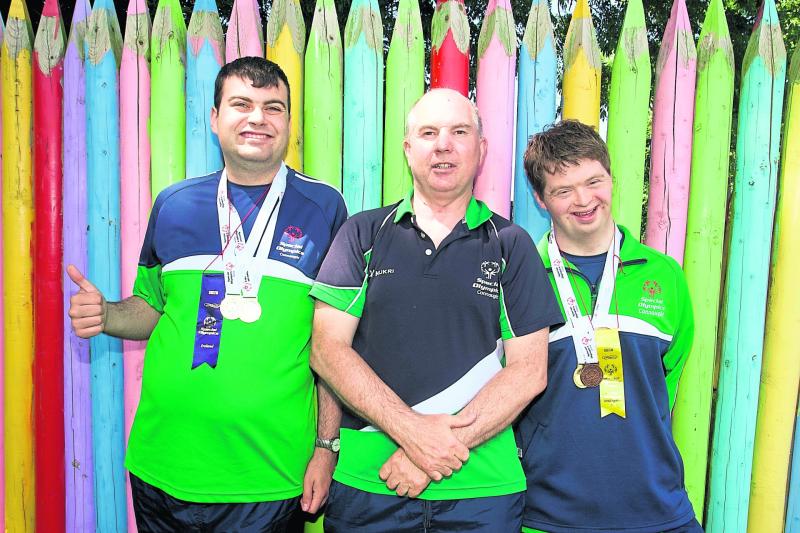 Proud as punch: Niall Murphy who won two Gold medals at the recent Special Olympics Ireland Games, with coach Liam Madden and Philip Gray who won one gold and one bronze medal.

The Special Olympics Ireland Games will be ones to remember for two Longford athletes, Philip Gray and Niall Murphy, who won gold medals at the recent Games.

Both are members of Longford Special Olympics and represented Connaught in the games recently held in Dublin.

Both swimmers train in Longford Coral Leisure Centre where they are coached by Carmel Leahy and Liam Madden.

Swimmers from all over Ireland representing each province gave it their best in an effort to bring home a medal.

Both Niall and Philip won individual medals as well as gold in the relay races.

Philip won bronze in the 25m backstroke in a keenly contested race with only fractions of a second separating the first three.

Niall, an accomplished breaststroke swimmer left the rest behind in his individual race to capture gold.
The Killoe man would represent Connaught in the 4 by 50 individual medley on the last day, where he swam the second leg handing over the lead to his team mate. The team finally clinched gold.

In the 4 by 25 freestyle relay race, Philip swam the first leg against an accomplished swimmer from Ulster and matched him stroke for stroke in an intriguing contest. Team Connaught would capture another gold in this event.

This was a great achievement for the two Longford lads in front of their delighted families and hundreds from all over Ireland.

Well known stars from TV, sport and entertainment were on hand to present the medals.
The event started in Tallaght Stadium in front of a packed crowd, which was addressed by Uachtaráin na hÉireann, Michael D. Higgins and, following his speech, the athletes danced to many celebrities including Jake Carter.

Both Niall and Philip were honoured at an event in St Theresa’s NS and later that day another event was held in St Christopher’s on the Battery Road, where there were great celebrations in the company of family and friends.

The 2018 Games were supported by 600 coaches and official delegates and 2,500 volunteers, with thousands of spectators turning out to cheer on athletes.

All-Ireland titles are rare in Longford, but these seven lads have put Longford on the map for all the right reasons.