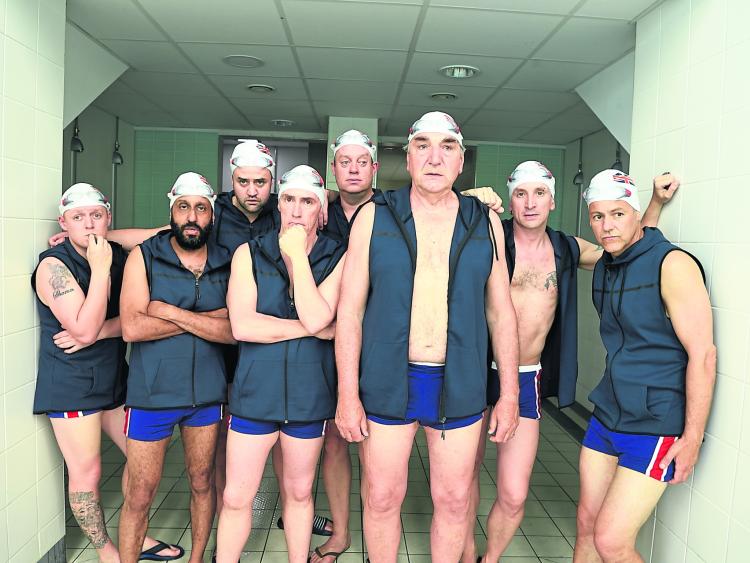 It usually takes a lot of skill and hard work to get a break in acting, but for Longford man, Ronan Daly, it wasn't his acting skills that landed him a big part in Oliver Parker’s feel-good comedy, but his swimming ability.

The Legan native was brought on to train the actors in Synchronised Swimming but was in so many shots that a role was created for him in the film alongside such stars as Rob Brydon and Jim Carter.

Faced with a full-blown mid-life crisis, accountant Eric (Rob Brydon) joins an all-male group of synchronised swimmers and discovers that making patterns in a pool can, for a couple of hours at least, give him escapism from the bumps in his work and marriage.

Initially keeping their personal lives in the locker, the ramshackle squad and coach Susan slowly begin to reveal their inner lives, as well as their paunches.

But can they get their routines, not to mention their lives, in sync as they embark on an unlikely journey to Milan to compete in the World Championship?

Ronan gave up swimming in his teenage years, as he thought socialising and parties were far more interesting than going up and down a pool.

Ronan would describe himself as the reluctant sportsman and he only got into synchronised swimming because his bluff was called.

He decided to go back to swimming at the behest of his partner but backed out in a fit of pique saying he would get back into a pool if the club started synchronised swimming.

A few months later, lo and behold, the club set up a synchronised swimming team. So Ronan had to join.

He took to this like a duck to water, which was a surprise as Ronan is no sportsman. In fact the only physical exertion he did was running for a bus, and if he could avoid that he would.

His team was ground breaking as it was Britain’s first male-only synchronised swimming team.

He and his teammates campaigned tirelessly to get the team recognised in an exclusively women-only world.

It is fair to say that they suffered considerable prejudice. This led to a laughable situation where middle-aged men were in competitions against seven year old girls.

But as Ronan and his team quietly persevered against all odds, they started to be taken seriously and not seen as a freak show or joke.

They went on to win several medals including a gold medal in the 2010 Gay Games in Cologne.

Ronan was completely uninterested in taking part in the film 'Swimming with Men' and refused to go to auditions, which were being held in London, preferring to be working on his house in Longford.

But a perfect storm was brewing. He agreed to be the demonstrator double in the training camp for the stars of the film.

But only after he was told he would get paid for it - and realised the money would lime plaster two walls of his house - did he start to consider a more serious role in the production of the film.

It was soon realised that the stars needed real synchronised swimmers to hold the patterns together.

So it was agreed that Ronan and another synchronised swimmer would be in the film.

Ronan thought he would only be only be a dot in the background, but it soon became clear that he was in so​​​ many shots and his character had to be developed.

This is not the first time Ronan has been in front of the camera. Jo Brand, who was filming her swimming series 'The Big Splash', asked if she could perform with Ronan’s team at the opening of a sports centre.

It was filmed with Jo Brand’s inimitable style, but for the first time they raised a laugh not as a freakshow, but as synchronised swimmers.

Ronan spends his time restoring his stone house in Co Longford and going back to London to work and fund this project.

'Swimming With Men' will be in cinemas nationwide from Friday, July 6.