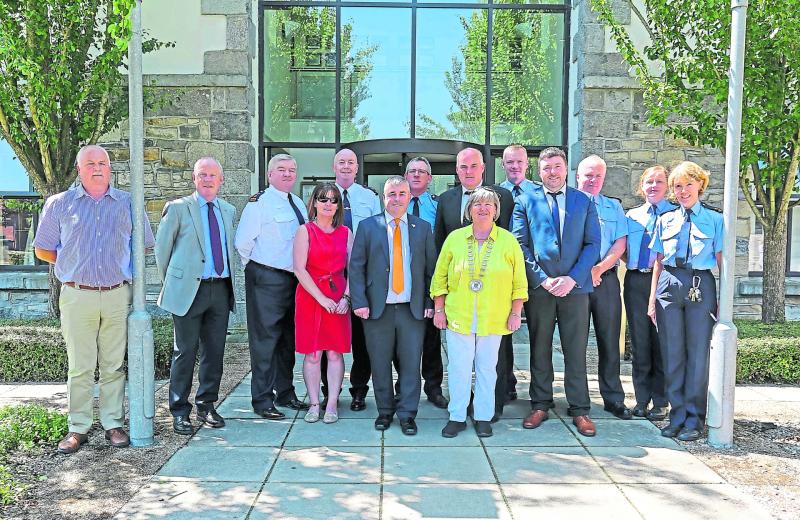 Longford Garda Station will get a multi million euro revamp after all in a move that’s already being hailed as being one of the county’s most “significant pieces of infrastructure” for several years.

Minister for the OPW and Longford Westmeath TD Kevin ‘Boxer’ Moran was in town on Monday to discuss the finer points of the project and its estimated €2m cost.

The proposed seven figure overhaul will see substantial improvements being made to the station’s accommodation needs including cell refurbishment works being carried out alongside a custody suite, the provision of a state of the art incident room and briefing facilities.

Mr Moran said he was especially thrilled to announce the news some four months after it appeared the venture had hit the skids.

“One thing I know about coming to a garda station is when you come with good news there is always something in the back waiting for you,” he joked in front of a select group of local councillors, gardaí and local authority officials.

The Athlone based TD took time to reserve a special mention for his “very good friend” Supt Jim Delaney, whom he said had been instrumental in rubber-stamping the project.

Others to come in for notable recognition were his two fellow Independent councillors Gerry Warnock and Mae Sexton, representatives he confided had incessantly lobbied for the station’s proposed upgrade.

Mr Moran was equally at pains to stress mooted improvements to both Granard and Ballymahon Garda Stations, which, though not immediately set for capital investment, remain very much on the Government’s agenda.

“I can tell you today this job is up on €2m, which is a serious amount of money into Longford and into crime,” he staunchly put it.

Supt Delaney reciprocated those plaudits, adding the planned refit had lifted morale “110 per cent” within the station.

“We absolutely needed cell renovation because the cells weren’t really fit for purpose going into the 21st century,” he said.

“And we needed to push on for a major incident room as Longford would have the most critical incidents in the division.

“Unfortunately, last year, with the tightening of finances, it got put on the shelf but thanks to the minister he stepped in and actually jumped in with both feet to get it back on track.”

Local councillor and Chairperson of Co Longford’s Joint Policing Committee (JPC) Cllr Gerry Warnock eulogised at how his Independent Alliance opposite number was someone who rarely came to Longford empty handed.

“I know a lot of the time when you do come to Longford you are coming with goodies and you certainly haven’t let us down today,” he said, prior to mentioning Mr Moran’s role in recent investments concerning Longford Fire Station, the extension of car parking facilities at government offices in the town and flood relief plans for the Mall.

It’s anticipated that once tender documents have been signed work will get underway later this year or during the initial stages of 2019.