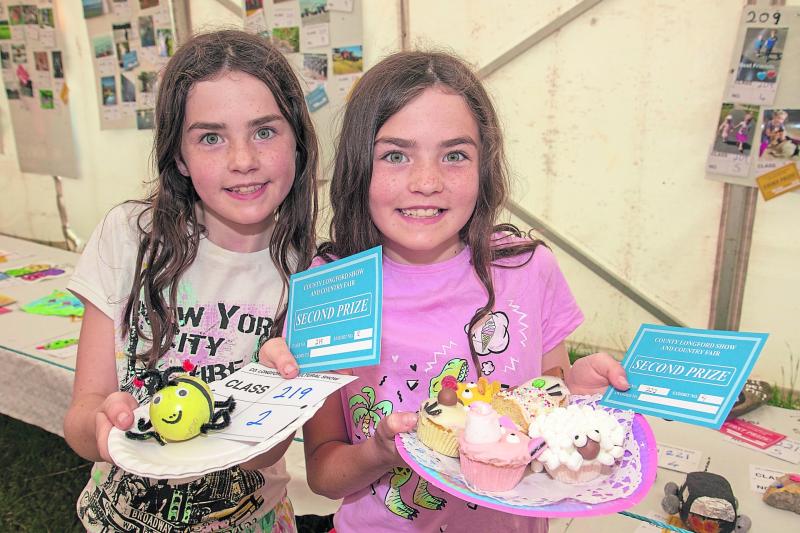 Twins Tachel and Hannah Gillanders who were second prize winners in the baking competition at Sunday's Co Show which was held on the Plunkett Family Farm in Lisnamuck.

It just gets bigger and better with each passing year.

The prevailing sentiments of one enthralled onlooker at Sunday's Co Longford Show & Country Fair as huge crowds took advantage of the good weather to sample the county's latest installment in agricultural excellence.

From soon after 12pm when the gates opened and the Leader made its way onto the sun kissed showgrounds at Lisnamuck, you could tell this was going to be a day to remember.

ALSO READ: 'Sure, where else would you be?'-Fun and frolics in full flow as bumper crowds line out for Co Longford Show & Country Fair

As soon as you walked through its front entrance, the sounds of champion livestock cajoled on by their respective owners and tenders was unmistakable.

Among them was Swiss native Rico Bischof.

Now residing in Newtowncashel, this was his first flavour of a Co Longford Show as he waited patiently for his three goats to be adjudicated upon by a panel of judges.

“It's great as you meet a lot of people that are interested in goats and it's nice to see people get a chance to have a look at animals they might not normally see, to ask questions and learn more about them," he said.

One of the surprising elements of our brief confab, as it turned out, was the absence of any reference to a certain World Cup and a date with Sweden yesterday (Tuesday).

Not that any of that mattered of course with all eyes very much fixated on the umpteen competitions which were going on just yards away from us.

This particular show novice, decked out in the most unorthodox of farm related clobber, and accompanied by his excitable three year old daughter, soon ended up running the rule over the countless number of sheep that were on display.

“Can I touch them Daddy?” came the predictable and almost instant question.

Whether it was in keeping with show protocol or not, yours truly is still none the wiser but it was a plea even the most strong-willed of parents would have had difficulty ignoring.

A short distance down members from Longford Women's Link's mobile childcare service, Catkins on the Move could be seen hard at work.

Busily tending to a large crowd of eager children as they waited to get their faces painted, Fiona Quinn indicated just why the occasion attracts the types of attendance figures it does year after year.

"It's the fact it is such a family event," she put it simply.

"You can come with kids three years of age or younger and the older people enjoy it. Especially on a Sunday when you have weather like this as a family, it's just lovely."

It was probably a euphemism for the way, one by one, child after child lined up to have their faces daubed in various multitudes of paint.

“Now, what would you like me to paint on your pretty little face?” Fiona politely asked her next client.

“Elsa,” was the brusque and clear-cut riposte uttered back in her direction.

As she tried her level best to live up to those demands, reams of show-goers could be seen queuing up to get their hands on a well earned drink, snack or customary 99'.

Asked about if the weather had played a part in encouraging larger numbers than perhaps had been originally expected, Fiona's response was unequivocal.

"Oh God definitely," she said, waving her hands ever so slightly to try and catch her breath amid the searing heat.

"There was a bit of drizzle last year because I remember people running to get under our canopy, but this is my second year working with Catkins on the Move and I just love it."

If Fiona looked in need of some much needed respite, that same appraisal was one which could easily have been levelled at Show Secretary Bernie Whyte.

In between attempting to keep a track of the many calls coming in on her mobile from various exhibitors, the Ardagh woman did manage to briefly reflect on what was an afternoon for all connected with the show to quietly savour.

"We are absolutely delighted," she beamed from within the confines of the secretary's tent.
"Last year's show was such a success particularly because we were in a new venue and building on from that this year has just surpassed last year.

"We are absolutely delighted with the way the people of Longford have come out in their droves to support us and to support their local show.

"The exhibitors have come from far and wide, the trade stands are absolutely phenomenal.

"There is a pets corner this year and there have been queues to get to view it.

"The horses, ponies and showjumping numbers are just astronomical, so yes we are delighted.

"With the enormous crowds we have had too, the whole thing has been a great success."

From those observations, the 2019 version might be hard pressed to match what unfolded in this tranquil, yet buzzing enclave on the edge of Longford town this afternoon.

Somehow, however, you get the feeling Bernie and her fellow hard-working committee members won't be found wanting in doing just that.