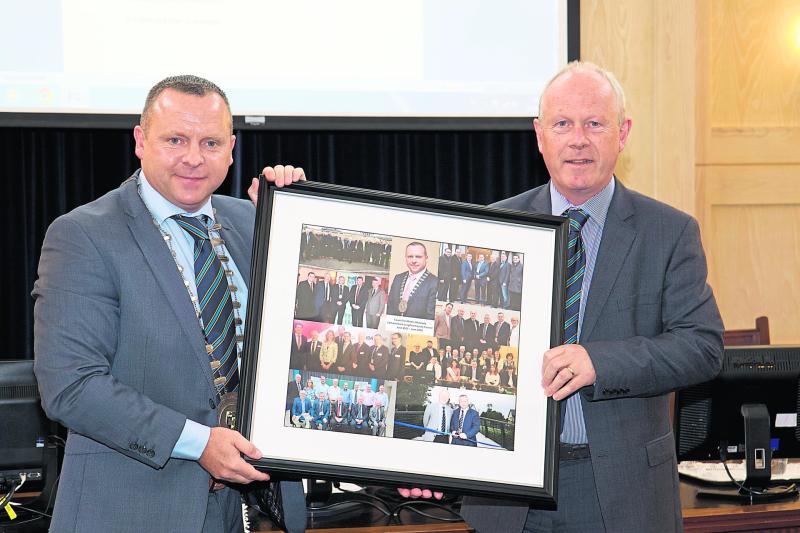 Cllr Martin Mulleady handed over his chain of office to the new Cathaoirleach of Longford Co Council, Cllr Luie McEntire during proceedings at Arás an Chontae on Wednesday night.

The local area representative in Drumlish also confirmed during the event that he will not be seeking re-election in next year’s local elections.

“I think that we have one of the best CEs and council directorships in Ireland,” said Cllr Mulleady, as he paid tribute to all the staff at Longford Co Council for their support throughout his year as Cathaoirleach of the county.

“It’s an election year, there is only 12 months left and every councillor will be getting ready for that and I want to wish them all well - everybody has to fight their own corner when it comes to elections - elections are tough, they’re hard and they are not easy; they are physically and mentally tough - it would be great to see you all back here in 12 months time.

“I will not be putting myself forward for re-election, but I will finish out my term and I wish everybody else well.”

Meanwhile, Cllr Mulleady pointed to the positive year he had at the helm of the local authority.

“There was numerous jobs announced over the last 12 months and I had the pleasure of meeting a lot of ministers,” he continued, before paying special tribute to those ministers who came to Co Longford and made their presence felt.

“I can be critical of ministers at times, but they did come to this county and they did deliver jobs for Longford, and with Longford Co Council here supporting everything it shows that we are all here wearing the Longford jersey together.

“No matter who is in this chair, it is important to keep that momentum going and keep the fighting spirit alive in this county.”

He then spoke of his trips to both London and New York where Longford, its people and the sprawling diaspora were always to the fore.

“We have met numerous people over the last 12 months with Longford connections and we have a working forum now that will build on what we have in New York and try and get more industry and jobs into Longford.”

Meanwhile, Center Parcs Longford Forest and the gas pipeline, as well as the very successful Leinster Fleadh Cheoil were also mentioned during proceedings.

“These are all very positive things that are happening in this county at the moment and I hope that I helped in any way that I could over the last 12 months to make this county a better place to live and work in,” said Cllr Mulleady.

“I want to thank the Fianna Fáil party who have been very supportive to me over my last 14 years as a councillor.

“Special thanks to the old fox himself - Luie McEntire - who is a good friend of mine and indeed a very good friend of the Mulleady family.”
Cllr Mulleady then paid tribute to his own family, whom he added were “close knit and always supportive of me”.

“We are very tight and support each other through everything; it’s very important to have a family that will support you even when things are down or bad, they will always come up trumps for you, and that is very important,” he concluded.

Presentations were then made to Anne Lee and Mary King whom Cllr Mulleady added, “kept the ship afloat” during official proceedings at Council HQ.