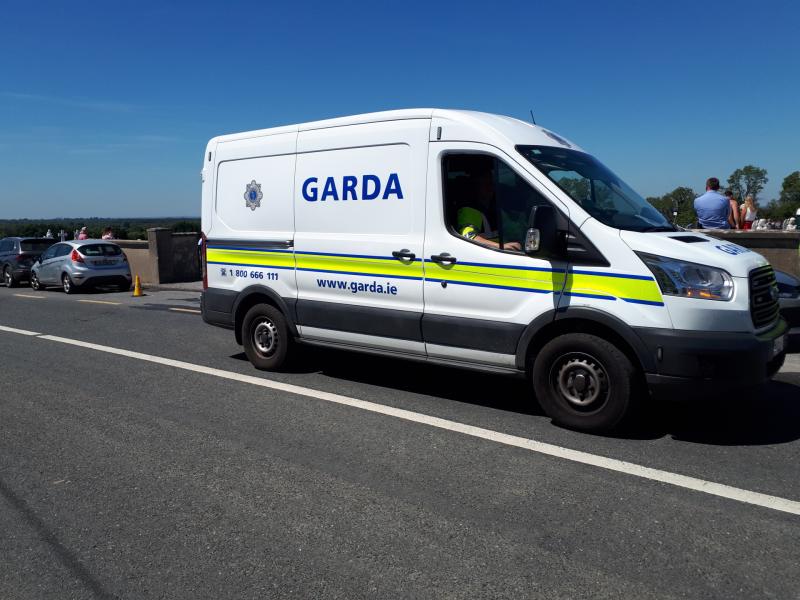 A Garda van stands parked outside the front entrance to Ballymacormack Cemetery on Sunday afternoon.

There was a heavy garda presence in Longford town on Sunday as more than 3,000 worshippers attended an open air service at Ballymacormack Cemetery.

Officers from Longford Garda Station were joined by personnel from the Roscommon/Longford Public Order Unit and Garda Dog Unit from Dublin who were on standby throughout the afternoon.

From midday cars could be seen parked out as far as the new Red Seal Cups factory in anticipation of the annual ceremony.

Superintendent Jim Delaney expressed his satisfaction at how proceedings passed off smoothly without incident.

“The traffic management side of things was particularly important,” he said.

“As it turned out very few people were discommoded and quite a few people with mobility issues were facilitated with being dropped off.

“There were at least 20 locals (officers from Longford Garda Station) and we did have a Public Order response available had it been required as well as the Garda Dog Unit who were there on standby.”

The Longford Garda chief was equally taken at how his officers handled a potentially tricky public and traffic management headache less than 24 hours previously as around 6,000 spectators attended the Longford-Kildare All Ireland Championship qualifier at Glennon Brothers Pearse Park.

The sudden suspected heart attack suffered by one man inside the grounds apart, the evening will arguably be remembered more for the football than any significant gridlock concerns.

The Leader released details in its previous week’s issue and online of how garda bosses had drawn up a concerted traffic management plan to offset any lingering concerns over access to and from Longford GAA headquarters.

“When you prepare like we did and put the proper resources out you will get the successful outcomes you hope for,” said an upbeat sounding Supt Delaney.

“It was really important for us that the traffic management side of things worked, which it did do very well.

“There was only one critical incident inside the ground which was managed excellently by the emergency responders and that man is making a full recovery I understand.”

In redirecting his focus back to Cemetery Sunday, the former Carrick-on-Shannon based District Inspector also told of the wider response he and his band of officers had received from the general public.

“It was great to see so many people pay their respects to deceased family members and we got a lot of compliments from people who recognised that we (gardaí) were there,” he said.

That all round sense of buoyancy was one Supt Delaney said had set the seal on a propitious past seven days for law and order in the greater Longford area.

In referring to the arrests and subsequent court appearances of eight people over suspected drug dealing offences last Wednesday coupled with sentences handed down to a clutch of individuals in the Circuit Criminal Court later in the week, Supt Delaney said: “It put a cap on a very successful week and underlined the commitment of the Gardaí to enhancing the quality of public life in our community.”