End of an era for owners of long established Ballymahon firm 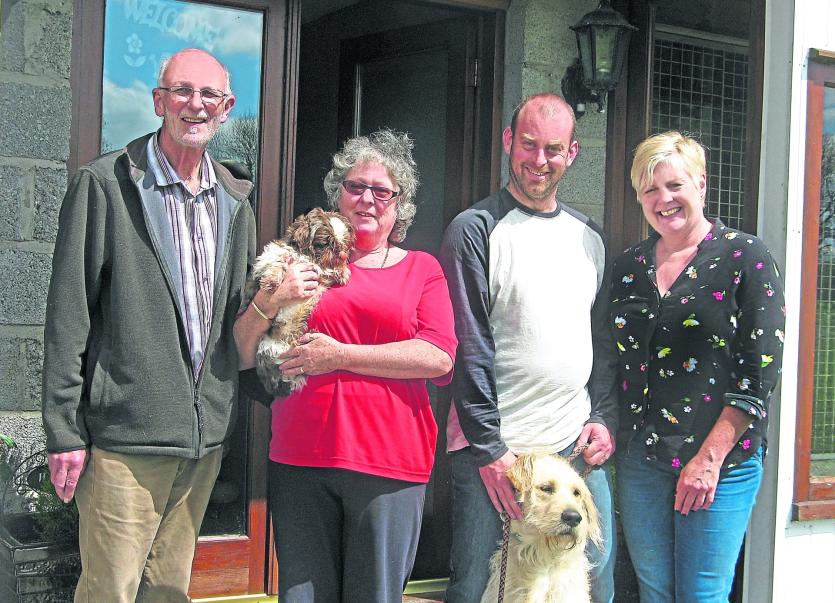 Ron and Vona Clarke and Steve and Alison Tomlinson, owners of The Dog ‘n’ Bone Cat ‘n’ Mouse Cattery and Boarding Kennels at Cloncullen, Ballymahon said goodbye to their business of 16 years this week

It’s the end of an era for The Dog ‘n’ Bone Cat ‘n’ Mouse Cattery and Boarding Kennel as owners Ron and Vona Clarke said goodbye to their business of 16 years earlier this week.

The couple have formally passed the torch of the business to another couple, Alison and Steve Tomlinson, and moved to Wales, where they plan to be with their daughter and her family.

“My little granddaughter has a rare form of cancer and that’s why we’re leaving,” Vona explained to the Longford Leader last week.

“We’ve lived in Ireland for 22 years and we opened the Dog ‘n’ Bone boarding kennels 16 years ago, but I’ve been working with animals for 58 years.”

It’s been a rollercoaster 16 years for Ron and Vona who have loved every minute of running their business - from building the kennels and establishing themselves in Ballymahon to meeting new pets and gaining new customers every year.

“Everything about the past 16 years has been a really great experience,” said Vona.

“It’s all good memories. And we’ve made lots of great friends - not just good customers, but really great friends. And leaving is going to hurt a lot because we’ve become so attached to the animals too.

It’s been a very rewarding career.”

But, she added, the couple have to prioritise their family and headed over to Wales on Monday to be with their daughter, Diane Dean, son-in-law Craig, and grandchildren, Rylee (9), Osmund (11), Alex (13) and Chira (14).

“We’re going to Wales because we want to help my daughter, Diane, and her family. We’ve got three other grandchildren who are suffering terribly with their sister’s illness,” said Vona.

“Our 14-year-old granddaughter is already having a difficult time because of everything that’s happening with her sister. But as soon as grandad gets there, we’ll sort her out because she and grandad are best friends.”

It’s been a very rewarding 16 years for Vona and Ron, who were eager to thank their many customers for using the Dog ‘n’ Bone boarding kennels and to welcome the very capable new owners.

Most importantly, the couple are pleased that their business will be well-managed by Steve and Alison.

“You never know what tomorrow is going to bring. We were going to retire here in Ireland. But family comes first,” Vona concluded.