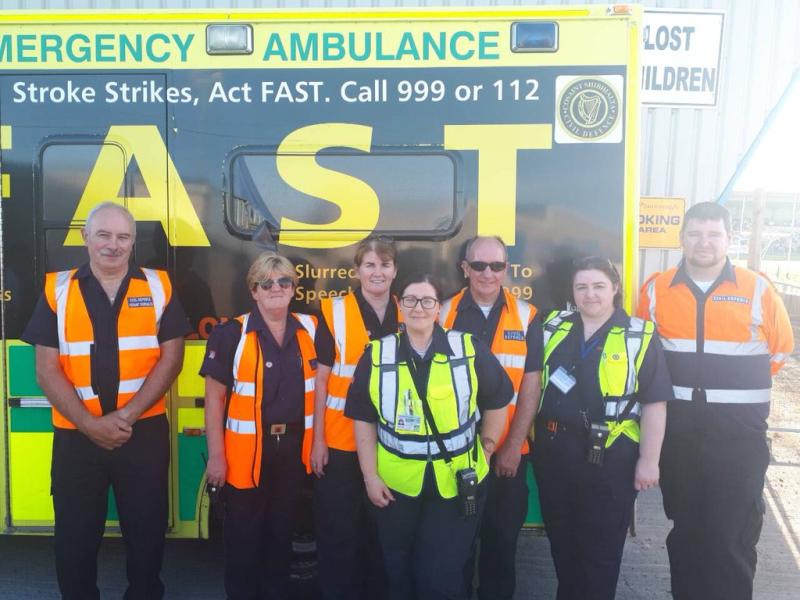 Members of Longford Civil Defence who, together with GAA officials, local medics and gardaí, rushed to the aid of a suspected heart attack victim at Glennon Brothers Pearse Park on Saturday evening.

GAA officials and ambulance volunteers have been credited for saving the life of a man who sustained a suspected heart attack during the Longford-Kildare All Ireland qualifier at Glennon Brothers Pearse Park on Saturday evening.

They, together with a doctor and nurse, administered CPR on the Kildare supporter moments after the man collapsed in the VIP area of the ground.

It’s understood a defibrillator was also called upon in a desperate bid to keep the man alive while awaiting the arrival of paramedics.

The stricken man was soon transferred to Mullingar’s Midland Regional Hospital with the aid of a garda escort where he remained overnight.

In a statement released to the Leader yesterday (Tuesday), Longford Co Board Secretary Peter O’Reilly praised the actions of all those involved, adding the spectator was now out of danger.

“Whilst you can never plan in real time for such incidents, it was heartening to see that our medical plan worked and how all involved worked together to save a life. Longford GAA wish to thank the Members of Longford Civil Defence, An Garda Síochána, HSE Paramedics, Doctor, Nurse and our own stewards who were involved in the happy conclusion of this medical emergency,” he said.

“We also wish the patient a speedy recovery.”

Longford Superintendent Jim Delaney gave further weight to those congratulatory plaudits as he too heaped praise on the heroic efforts of all concerned.

“There was only one critical incident inside the ground which was managed excellently and that man is making a full recovery I understand.”