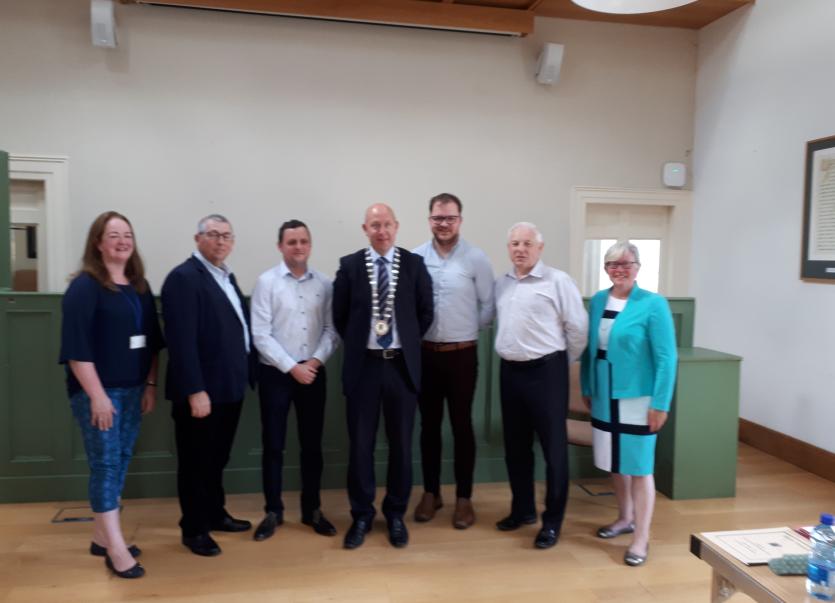 Cllr Paul Ross is flanked by his fellow Ballymahon MD colleagues and council officials at this evening's annual general meeting.

Cllr Paul Ross has been elected the new Cathaoirleach of Ballymahon Municipal District.

The Legan based Fine Gael local politician succeeds party colleague Cllr Ger Farrell who had occupied the role for the past 12 months.

Tributes were paid to outgoing cathaoirleach Cllr Farrell with a number of councillors laying claim to a string of projects and funding announcements which had come the way of the greater Lanesboro and Newtowcashel area during his tenure.

Cllr Farrell, himself, noted the onset of four OPD (Older Persons Dwellings) together with 33 social houses in the south Longford town as being one specific highlight.

The arrival of €40,000 in terms of a streetscape project for Ballymahon, a town Cllr Farrell said was "thriving" was likewise singled out.

As for his successor to the role, Cllr Ross stressed he was keen to continue the "fantastic working relationship" which has become very much evident in the Ballymahon MD chamber over the past four years.

"I have a number of priorities over the next 12 months," he told the Leader, moments after his election was rubber-stamped.

"One is sourcing as much funding as possible and getting the library in Edgeworthstown started which will boost and lift the whole town.

"There is also number of tourism projects we will be looking at, primarily walks from Newcastle Woods to link up with the Royal Canal."

He said the one "elephant in the room" was the impending arrival of Center Parcs, a multi million euro investment which required extra special focus from the local authority.

"We have to make sure Ballymahon, as a town, is ready for the extra traffic and the volume of people that will be in the town," he maintained.

"We have a consultation process which is now finished and we hope to have construction started on that in the first quarter of next year, but we have to try and get all these projects started so that they are ready for Center Parcs next July."