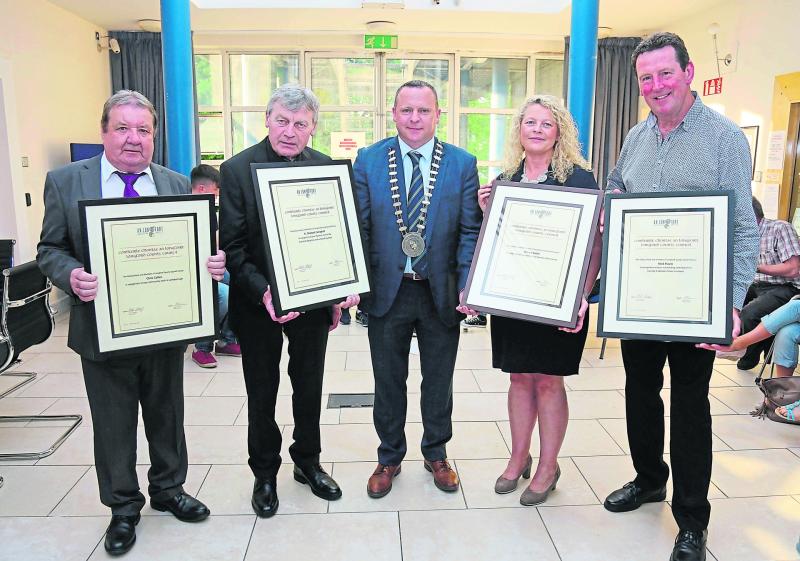 The occasion is one where the county's first citizen recognises the unsung efforts of various groups, organisations and individuals who have gone above and beyond the call of duty in their respective fields over the past 12 months.

This year that responsibility fell on the shoulders of outgoing Cathaoirleach Cllr Martin Mulleady.
Each of the county's three municipal districts put forward their own nominees with Ballymahon Municipal District nominating Chris Cullen.

The Lanesboro based father of two and building contractor was honoured for his deep seated role in community life chiefly through his unwavering philanthropic efforts for Rathcline GAA.

Dedication to the local community was a trait which played a pivotal role in Fr Michael Campbell's nomination by the elected members of Granard Municipal District.

The Abbeylara parish priest is widely credited with the establishment of the north Longford village's state of the art handball facilities, a venue borne largely on the back of National Lottery funding.

Similar developments such as Abbeylara GAA's new grounds, the high calibre restoration of both local churches, upgrades to St Mary's and St Bernard's National Schools and the development of a €1.2m parish centre were feats principally orchestrated through the dedication and resolve of the Co Leitrim cleric.

A theme of venerating the educational and business talents of Eimear Caslin was one of the predominant factors behind the NUIG graduate's nomination by Longford MD.

The daughter of Eileen and the late Noel Caslin, the former Scoil Mhuire pupil has held down a series of lofty positions with some of global corporate and pharmaceutical giants.

Currently the general manager of British headquartered healthcare giant GlaxoSmithKline (GSK) and responsible for its Irish division, Eimear is presently undertaking a diploma in company directorship.

The Drumlish based performer has enjoyed more than three decades of success at the top of the country music industry, selling out venues both at home and abroad.

But it is the affable musician's dedication to charity work which also motivated Cllr Mulleady to nominate his close personal friend for the title 'Cathaoirleach award recipient 2018'.