Spirit of novelist, playwright and poet Oliver Goldsmith brought back to life in south Longford 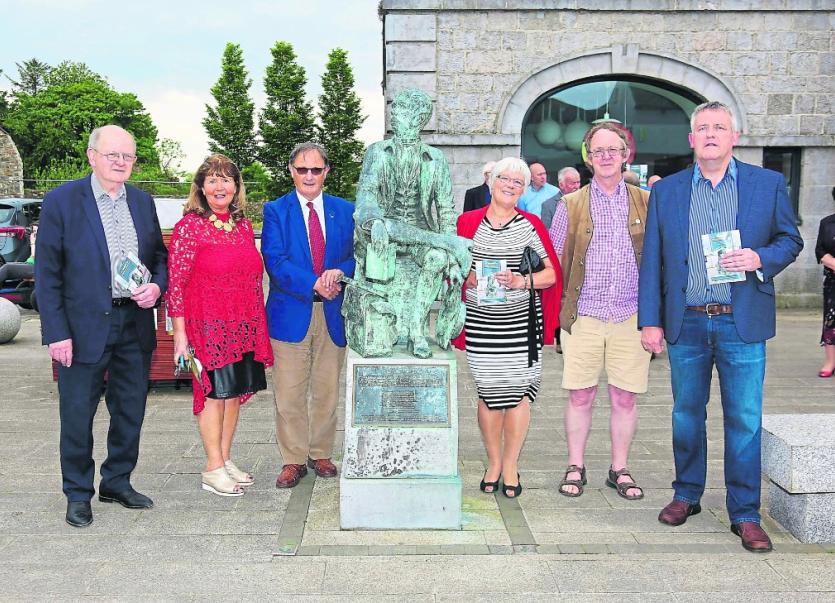 The spirit of distinguished Midlands novelist, playwright and poet, Oliver Goldsmith, was brought back to life over the June bank holiday weekend through readings, lectures, talks and poetry from some of the country’s top writers at the 34th annual Oliver Goldsmith Literary Festival.

The prestigious summer school event – which is now the third oldest literary festival in the country – was held at various locations, along the Longford/Westmeath border, that are associated with the iconic wordsmith - best known for his novel ‘The Vicar of Wakefield’ (1766) and poems ‘The Deserted Village’ (1770) and ‘The Traveller’ (1764) - from which the theme of this year’s event was selected.

From recitals at The Rustic Inn in Abbeyshrule, speeches at the Goldsmith Room in Ballymahon Library, poetry readings at Pallas - the birthplace of Oliver Goldsmith, to traditional music sessions at The Three Jolly Pigeons, in Tang, this year’s theme – “Where wealth and freedom reign contentment fails. And honour sinks where commerce long prevails” was expressed through a multitude of storytellers with Midlands connections.

GAA ‘an instrument of public good’

Stars of the festival included: Sunday Independent Sports Editor - and Longford native - John Greene who aligned Goldsmith’s words with the shifting ethos of the Gaelic Athletic Association by pointing to it as an instrument of public good.

“For over 130 years the GAA has taken care of the country’s recreational needs for so long, picking up the slack . . . because for decades the state turned its back on its duty in doing so.

“The worry for those of us who believe strongly that the GAA is a unique blend of a sporting and cultural socialist movement, is that it is losing sight of what it is supposed to be about.

“In that regard, I note the theme of this year’s festival, from Goldsmith’s poem ‘The Traveller’, that honour sinks where commerce prevails”.

“The county game has become a monster. It costs too much; it takes up too much time and attention; it is crass; it is capitalist; it is purely based on winning and losing; it is greedy; it is self-serving; it is elitist.

“I don’t despair yet, because I see enough good people to carry the torch handed down by the elders,” he told attendees during Sunday’s Goldsmith Miscellany readings.

John Connell, the award-winning investigative journalist, author, playwright, producer, farmer and writer of number one best-seller ‘The Cow Book’ – and native of Ballinalee – outlined how his career has been ironically shaped and influenced by the writings of Goldsmith during his presentation ‘Goldsmith and Me – a Long History’.

He honed in on links and similarities between the two – such as analogies and anecdotes of how they both strive to give a voice to the voiceless and marginalised in society. He also highlighted their mutual understanding on the importance of preserving simple, traditional cultures in a fast-paced world.

John – whose journalism is much based on human rights – told of his brave documentary work in Australia which lead to the freeing of Tamil refugees from wrongful detention by the Australian government in 2011. His courageous efforts lead to him being the recipient of two Walkley Awards - regarded as the Australian equivalent of the Pulitzer Prize.

Why a free press is worth defending

Seamus Dooley, Irish secretary of the National Union of Journalists in Ireland – who also previously served as a journalist at the Midland Tribune, Tullamore Tribune and is a former editor of the Roscommon Champion pinpointed Goldsmith’s early life as a journalist in London where he was known as a ‘Grub Street hack’ during his talk ‘Journalism: Not Just Business. Why a free press is worth defending’.

He said that in today’s industry Goldsmith “would probably excel as a tabloid journalist. . .He was not afraid to afflict the comfortable and would probably have made it to the INM (Independent News and Media) list of ‘persons of interest’”.

He continued: “Just as it is all too easy to read Goldsmith in a haze of nostalgia, I am conscious of the need to avoid becoming overtly sentimental in discussing the good old days of print journalism; but, it is worth considering the historic role of the regional press.

“The role of Irish newspapers in the struggle for self-determination is deserving of a separate lecture; but, it is worth noting that most of the newspapers in Ireland were founded in support of a political agenda – and that is especially true here in the Midlands.

“Throughout the country provincial newspapers provided sound employment and acted as a mirror. That is not to say that their proprietors were not concerned with profit, or were always benevolent employers – they most certainly were not; but there was, in my experience, a recognition that with ownership came responsibility, a sacred trust to serve the community.

Dr. Michael Griffin, senior lecturer in the School of English at the University of Limerick, author and leading national and international scholar on the writings of Oliver Goldsmith, offered a presentation on ‘Failures of Contentment: Goldsmith, Brexit and Trump’.

He asked how would Goldsmith have understood the “phenomenon” of the 45th and current President of the United States, Donald Trump.

He described the “genius” of Goldsmith as his ability to “communicate between two worlds…His journalism is crucial,” he said.

Living during a time of wide-scale migration from rural to urban areas; Dr. Griffin also highlighted Goldsmith’s interest in exploring a “type of cosmopolitanism rooted in the community”. This interesting observation resonated with audiences in discussion afterwards with talking points centred on the current urban/rural population trends in Ireland.

Other exceptional contributions over the three day event were made by: Longford native Dr Fergus O’Ferrall, Lay Leader of The Methodist Church in Ireland, historian, lecturer at Trinity College Dublin and author of a number of books including: Catholic Emancipation Daniel O’Connell and The Birth of Irish Democracy 1820-30.

Gerard Smyth, Poetry Editor of The Irish Times, and award-winning writer of ‘A Song of Elsewhere’, ‘The Fullness of Time: New and Selected Poems’ and ‘The Yellow River’ captivated audiences at a special ceremony in Pallas facilitated by Joe and Chris Farrell.

With attendee numbers significantly boosted this year, Seamus McCormack, chairman and founding member of the Oliver Goldsmith Literary Festival, offered his sincere thanks to all sponsors for their invaluable support over the years including major sponsors: Westmeath and Longford County Councils; Creative Ireland and Foras Eireann.

“We are delighted with the success of this year’s festival. It’s not easy to maintain any event over 34 years; but we felt this year that we had a particularly strong line-up and this indeed was the case as every speaker made a very thought-provoking and interesting contribution.

“We were delighted that one of our talks even made the national press when Seamus Dooley’s talk on Saturday was printed as an opinion piece in Monday’s Irish Times.

“We had a full-house at most of our events and the lovely weather certainly helped - particularly at the poetry reading on Sunday in Pallas.

“All in all, we felt this year’s festival got to grips with an interesting theme and we will soon start planning again for the 35th festival in 2019,” he said.