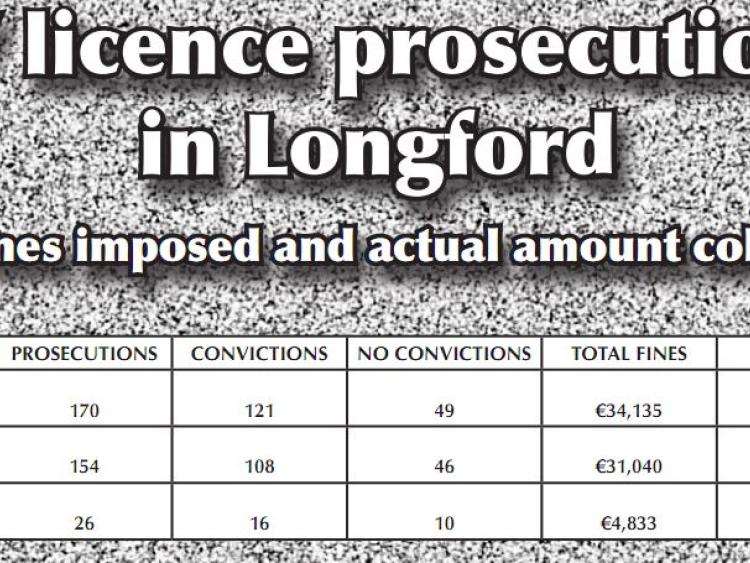 Three quarters of people who come before Longford courts and are convicted of having no TV licence are refusing to pay fines handed down to them, the Leader can confirm.

Over the past two and a half years, less than €17,500 has been recouped in fines out of a total of over €70,000 that were issued by the District Court.

Since the beginning of 2016 and until April of this year, approximately 350 people have come before Judge Seamus Hughes in prosecutions taken by An Post.

Seventy per cent of those, or 245 defendants, were subsequently convicted and handed a monetary fine by the court.

In figures obtained by the Leader under the Freedom of Information Act, it would appear a growing number of people are failing to meet the terms of court judgements handed down.

Despite a grand total of €70,008 in TV licence fines issued between January 2016 and April 2018, a sizeable €52,526 remains outstanding. Interestingly, the Courts Service revealed that of the 245 convictions recorded, not a single case was appealed to the Circuit Court.

Courts can impose fines of up to €1,000 for a first offence and up to €2,000 for second and subsequent offences.

An Post is charged with the issuing of TV licences and also with the enforcement of the current licence fee regime.

A tax which has routinely come in for much public criticism, talk surrounding the future of the TV licence fee has steadily ratcheted up in recent months.

A major new report into funding public broadcasting is proposing a radical shake up of the licence fee system.

Also mentioned in the draft proposals is a possible 'culture tax' to be levied on internet service providers.

The document also warned that the current licence fee of €160 should be raised to as much as €175 along with the suggestion that its rate should be linked to inflation in the future.