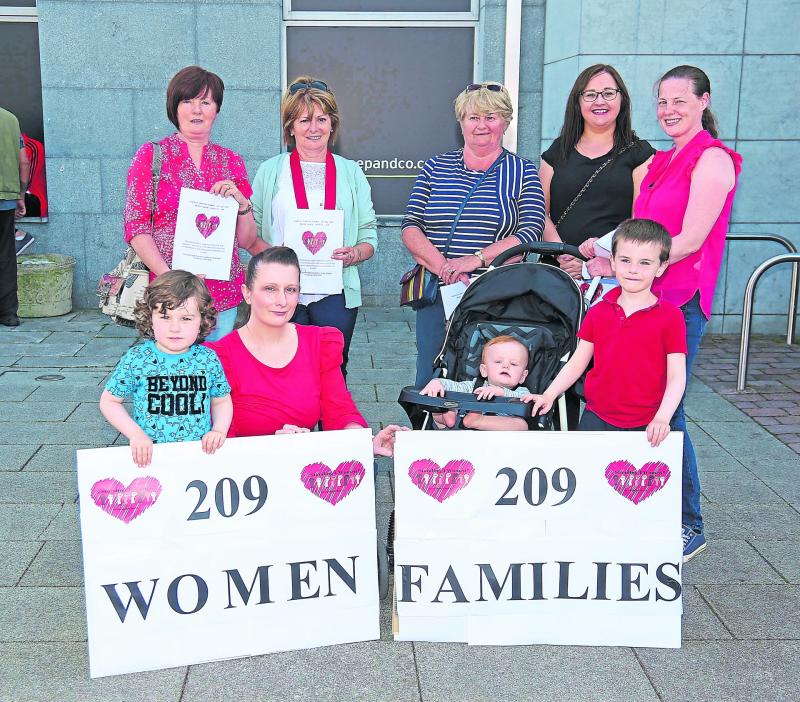 Longford women gathered at the Market Square in Longford town last Wednesday evening in the sunshine as part of a national rally to support the 209 women who were misdiagnosed under the Cervical Check scheme.

Organised by the newly formed Standing4Women led by Ardagh woman Francesca Pawelczyk, the group of local women wore red as they stood, in the Market Square, in solidarity with those affected by the scandal.

“We are doing this to show the women and families affected that we are with them,” said Francesca, before pointing to the fact that the aim was to support those impacted by the scandal and pressure the Government and HSE into taking immediate action in respect of the matter.

“We are asking for relevant policy for the upcoming Bill on Mandatory Disclosure to be implemented in conjunction with an agreed timeline and are calling for the provision of independent supports for those affected, including and not limited to, an immediate point of contact for those affected, and a multidisciplinary support team.”

The local organiser went on to say that the rally was also about women ”standing together”.

“The reasons we are doing this is that we are strongest standing together and we are standing for Vicky, Emma, Irene, Catherine, Orla, Julie, Rosie, Debbie, Ann, Carol; for those speaking up daily and for all 209 women.”

She said she was there to show her support to those impacted by what happened.

“I’m here,” she added, “to support all the women involved in this scandal; it is a terrible, terrible thing that has happened”.

Aileen Ferris travelled from Cork to participate in the Longford rally.

She told the Leader that she was out to show “solidarity” to all the women affected.

“This scandal has been handled and managed so badly and if this was men’s health it wouldn’t have happened in the first place and it would have been handled properly,” she added.

“Women are standing up now and saying enough is enough; the recent referendum really helped with that too.

“Women are standing up now and saying we want proper healthcare and that is the way it should be.”