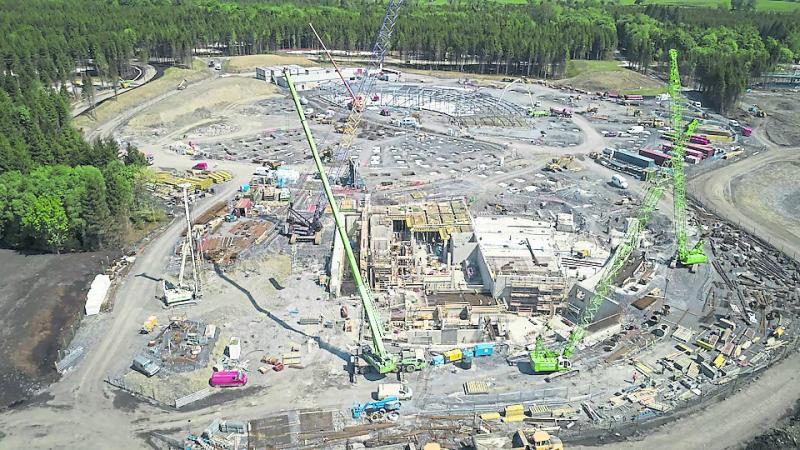 The grand opening of Center Parcs Longford Forest next year will outstrip any of its five existing holiday villages in the UK.

That was the bold promise delivered by senior bosses of the British based leisure firm as it invited journalists on a guided tour of its €233m project in Ballymahon last week.

As per usual, Center Parcs CEO Martin Dalby was there full of the zest and passion that has been almost commonplace since first announcing the company’s arrival into Ireland in April 2015.

In between taking time to reveal there were no fewer than 700 labourers on site to greet our arrival allied to the claim spending levels on its Longford Forest had now reached €1m a week, Mr Dalby was keen to stress the project was very much on track.

“We are absolutely delighted with the progress of the construction and development (of Longford Forest),” he said.

“We had a meeting this morning with the project team and we are on programme.”

He was equally at pains to point out how the bulk of its planned 1,000 staff recruitment drive was just around the corner with a series of roadshows being planned for later in the autumn.

The eagerness that was etched across the chatty Yorkshireman’s face has become somewhat of a staple of the Center Parcs brand.

Pride and professionalism are at the very apex of that model, virtues its PR manager Simon Kay proudly demonstrated as he talked about what visitors to its 395 acre resort can enjoy.

The carrot of boasting a subtropical swimming paradise at 84 degress all year round was a “huge draw”, he contended.

“We are really confident in the product we are bringing to Ireland and Irish families,” he said.

There is a discernible realism though to the company’s long term ambitions. After all, this is a business archetype that has been there, done that and got the t-shirt more than right through the successes of its five incumbent forests that straddle the British countryside.

“We know we have got quite a task on our hands because it is a brand new company and it’s a brand new type of break so it will be a task to get to the kind of occupancy levels we have in England which is about 97 per cent all year round,” he said.

“But once we get people across the threshold and into this forest and people start to really understand what Center Parcs is all about I think from thereon in this place will do really, really well.

Quite a statement it may be, it’s a €233m promise Longford and Irish families will put to the test when it arrives on these shores in a little over 12 months time.