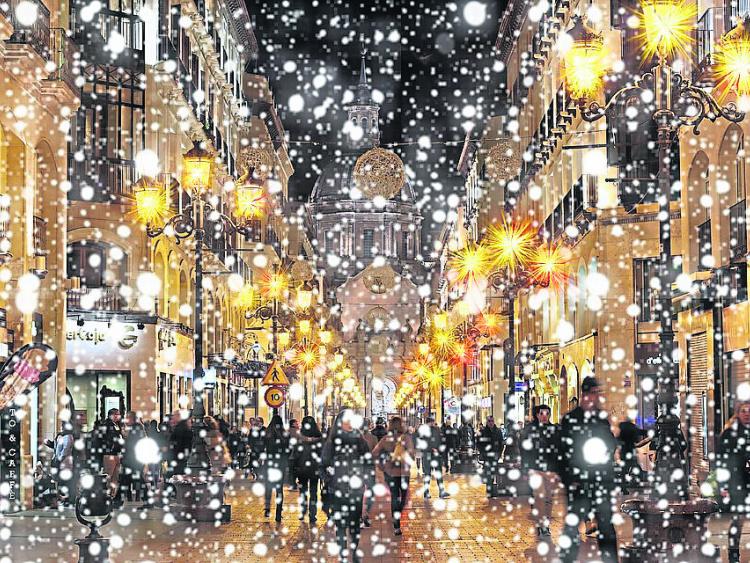 If you want your work to appear in the Leader, email us at newsroom@longfordleader.ie

Friday. It is eight am.

The streets of Dublin City are already flooded with cars.

Men and women sit impatiently behind the wheels, glancing furtively at their watches and sighing in exasperation.

The traffic passes by at a crawling pace. Across the way, a car horn rings out, as somebody becomes tired of waiting.

Parents bustle along the pathways with young children wrapped up tightly in padded coats and scarves and hats with fluffy bobbles bouncing as they skip along the paths, protected from the piercing cold morning air.

Brightly coloured schoolbags on their backs, the children chatter brightly to their exhausted guardians.

The starbucks and Costa coffee shops are near bursting point, with people desperate for their early morning caffeine boost. Other businesses prepare to open shop for the day, lights are turned on, the streets are illuminated.

The air is alive with sound, car engines humming, crowds conversing, and the pitter-patter of rain as it hits a surface. The noise stirs Noah, who wraps himself up tighter in his now soaked sleeping bag.

The city has awoken.

Time passes by quickly here, and before long it is 1pm. Lunch hour for many, the Friday school day finished for others. The streets are black with people once again, hurrying from buildings.

Noah sits on the roadside, shaking a paper cup pitifully. The spare change jingles inside. He is ignored by most, too busy to take even a moment to stop.

The smell of food fills the air. Some use the time to shop, rushing to get last minute Christmas gifts and supplies.

The queues seem never ending. Others spend time socialising, and go for lunch with friends or work colleagues, discussing the craziness of the holiday season.

Workers in cafes and fast food restaurants rush from table to table, trying to maintain composure when met with the few rude customers they always expect.

Secondary school students celebrate the end of another School Term, and the beginning of the Christmas holidays.

The city has stirred.

Two hours later, at 3pm, the Primary School students are released. The School gates are crowded with parents as children excitedly run out, ready for the Christmas Season.

The crowd talks of Santa Claus and presents and Christmas dinners.

Across the road, the Church bell rings out, and a group of people, the majority of whom are older, bustle out. One woman clutches tightly to her rosary beads, sits reciting the rosary in her head, pleading with God to bring her son home for Christmas.

A group of schoolchildren start frantically making snowballs, and the air is filled with shrieks as their playtime begins. They skid across the streets, barely taking a moment to ensure a car is not approaching.

Noah joins queues for dinner, after successfully making seven Euros fifty. His stomach howls in agony. He purchases the Christmas special of Turkey and Ham, and is immediately after told to eat in the streets, as a result of a customer’s complaint. The city has spoken.

By five o’clock, the blanket of snow covering the ground has grown ticker, and strong winds blow. Everywhere, people struggle to return home from their work day. Figures walking on the footpaths manage to pass out the crawling cars.

One woman gasps as she passes a gruesome car accident, and reflects on the sadness of it, this close to Christmas. She pulls in as the ambulance whizzes by.

Groups of friends split up and say their goodbyes, all desperate to return home to a blazing warm fire.

They wrap themselves up tightly, and prepare to face the chilling winds. The day is all but done.

At ten o’clock, parents tuck their children into beds asking them to behave for the babysitter downstairs. Children cry out, and beg them not to leave.

The pubs and nightclubs of the city begin to fill up. From young to old, hundreds take to the streets in an array of fashions. Young girls in tight skirts and stiletto heels struggle to keep upright on the icy floor, while older men and women judge their clothing choice from behind.

“They’re either gonna catch pneumonia or break an ankle, I reckon both.”

Bouncers line the doors where music is only heard as a faint thumping noise.

Down an alley, Noah wraps himself up in his sleeping bag for the night, his stomach already beginning to rumble again.

The snow crunches beneath him as he tries to get comfortable, reflecting on the fact that the night is a lot colder than he’s used to.

The nightclubs and pubs are in complete contrast to the outside, as the windows fog up with heat.

The city is alive.

By four in the morning, the last few stumble outside, calling taxis. The streets are almost deserted.

Crows and pigeons fly down, scavenging for old sandwiches and chips.

Down the alleyway, Noah’s teeth chatter uncontrollably. He curls up and goes back to sleep, his heart rate rising.

The city is in darkness, and only animals roam the streets.

Saturday. It is eight am.

The streets of Dublin City are flooded with cars. Men and women sit behind the wheels glancing at their watches and sighing. Children remain at home, relishing in the break from school. Businesses open early, desperate for the last minute Christmas shoppers.

The air is once again alive with sound.

The noise doesn’t stir Noah, still wrapped up tightly in his sleeping bag.

He lies there, still and silent, his skin as cold as the snow that still surrounds him.